We’ve launched a manifesto for the 2019 general election, calling on all political parties to set out how they will protect the rights of women and girls around the world, as part of a vision for a Global Britain. 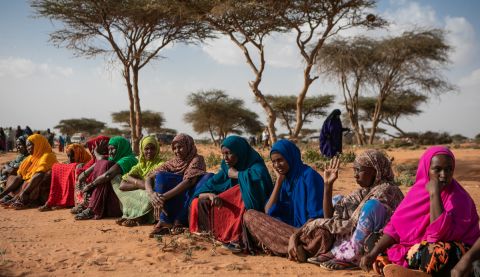 Women in an emergency camp in Somaliland, where ActionAid is protecting rights

The different political parties will soon be releasing their manifestos ahead of the 12th December general election, the first December election since 1923.

We have produced our own 2019 general election manifesto, which sets out the policies we want politicians to adopt in order to empower women and girls around the world: making sure that UK aid delivers change for women and girls in poverty, and placing women’s rights at the heart of international policy.

We want to see the next UK Government reflect our national values by taking global leadership for a more equal, more just and safer world.

Globally, women’s rights are in peril. One in three women experience violence, while women on average earn 24% less than men.

And the climate emergency is having the biggest impact on women and girls – with women making up 80% of those displaced by climate change.

The UK has been a global leader in championing women’s rights. Politicians across successive UK governments and different parties, right up to the highest levels, have been passionate advocates for gender equality.

But with women’s rights continuing to face attack, we need the next UK government – whichever party or parties it is made up of - to lead the global fight for equality.

Here are some of the key issues in our full manifesto, which we're calling upon all political parties and parliamentary candidates to support.

Continue to be a global leader on women and girls’ rights

Women and girls have rightly been a focus of the UK Government. We know focussing on women’s rights is essential because no community can truly prosper when half its citizens are denied the rights enjoyed by the other half.

Our manifesto calls on the next UK government to champion gender issues including violence against women and girls on the world stage.

We also want to see the UK scale up its commitments to gender equality through UK aid spending.

The next UK government should work with and fund grassroots women's rights organisations working on the frontline, as well as prioritising spending on projects such as the flagship ‘What Works’ programme to prevent violence against women and girls.

Keep our commitment to the world’s poorest

The UK can be proud of its commitment to spend 0.7% of national income on international aid.

Our world-leading Department for International Development (DFID) is recognised as being one of the most transparent and effective international aid agencies.

We want to see the next UK government continue to deliver on its aid commitments through DFID.

Aid must be focussed on poverty reduction, gender equality and sustainable development. It should be delivered through local organisations and women’s groups, and be provided in a flexible and reliable manner to respond to priorities identified by local communities in developing countries.

Ratify the International Labour Organisation convention on violence at work

Championing gender equality needs work with, but also go beyond, how aid is spent.

We want the UK to champion women workers’ rights across the globe. As a start, the UK should ratify the International Labour Organisation (ILO) Convention on the Elimination of Violence and Harassment in the World of Work - an international law to prevent sexual violence in the workplace.

Ratifying it in the UK would protect workers in the UK from violence. After doing that, the UK should then encourage other countries around the world to do the same.

International trade is another example of the type of policies across government that matter for women’s rights.

The UK needs to ensure that irrespective of the outcome of the Brexit debate, our trade policies work for the world’s poorest and most marginalised women.

For example, this means carrying out impact assessments on any prospective new trade arrangements, looking at how they will affect jobs, pay and working conditions for women.