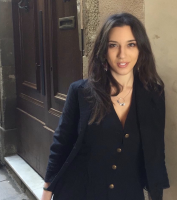 As voters prepare to go to the polls in the general election tomorrow, we are setting out where each party stands on global women’s rights. 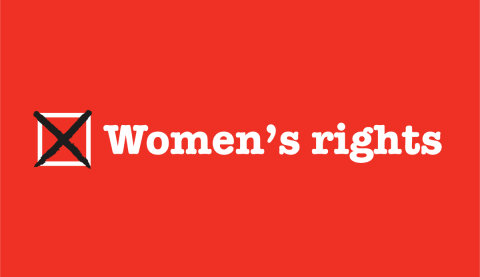 Stand up for women's rights this general election

The 2019 General Election has taken place in the context of increasing rollbacks and restrictions on women’s rights internationally. In a time of political uncertainty, when Britain’s place in the world is being debated, it’s more important than ever we continue to prioritise women’s rights and take a stand against gender-based violence.

Our manifesto scorecard analyses the extent to which parties have prioritised women and girls in their international foreign and development policy. Find out how the parties fared. 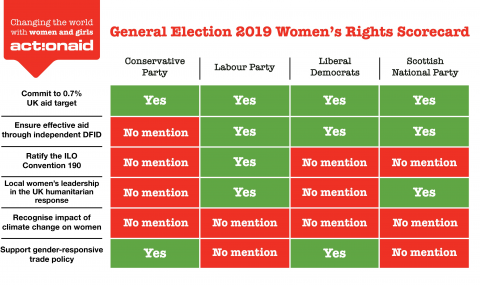 How did we measure it?

Our scorecard looks at what is said in each of the manifestos of the four largest parties which are expected to win the most seats, to grade them against six key ActionAid UK priorities.

One point to note is that a red cross does not necessarily mean that a party does not support our objective, but only that they haven’t specifically referred to it in their manifesto.

We are calling on all parties to:

We believe in the vital importance of maintaining the UK’s commitment to spend 0.7% of national income on aid for Britain to continue leading on poverty reduction and gender equality on the international stage. A

All four parties committed to this explicitly in their manifestos, which is great news.

To ensure overseas development aid is spent the most effectively – and reaches the most vulnerable - our international aid budget should be concentrated through the hands of the world-renowned Department for International Development.

Labour, the Liberal Democrats and the SNP all referred to a continued DFID in their manifestos, however, the Conservatives did not.

By ratifying the ILO Convention 190 which looks to implement a universal end to violence in the workplace, the UK will continue to lead on women’s rights issues and help to end violence against women and girls globally.

The Labour party pledged to ratify it in their manifesto, but the other parties did not mention it.

We want all parties to empower local women affected by a humanitarian crisis as leaders and decision makers, and to fulfil the UK’s ‘Grand Bargain’ commitments to ensure more humanitarian aid is spent directly through local organisations.

Labour have pledged to triple funding for grassroots women’s rights organisations as part of a gender transformative approach to all their international work, which would go a long way to help empowering women in humanitarian emergencies.

The SNP have pledged to press for action on UN Security Council Resolution 1325, supporting women who play crucial roles in peacebuilding.

There was no mention of empowering women’s local leadership in the Liberal Democrat or Conservative manifestos.

Recognise the impact of climate change on women

We want to see all parties recognise the disproportionate effect of climate change on women and girls to ensure that the action we take reaches the most vulnerable groups in society.

While all four manifestos contain policies to combat climate change, none specifically mentioned the impact climate change has on women and girls, or put forward gender-responsive climate policies.

The Conservatives pledged to ensure the UK’s trade agreements would include provisions that advance women’s empowerment.

The Liberal Democrats said they would focus on the transformation of the position of women through economic inclusion. The Labour party and SNP did not mention gender in their trade policy.

There are a number of other positive policies that parties put forward which aren’t captured by our scorecard.

For instance, the Conservatives said they will stand up for the right of every girl in the world to have 12 years of quality education and will continue to fight crime against women and girls, including rape, FGM and forced marriage.

The Labour, Liberal Democrats and Scottish National parties have all pledged to ratify the Istanbul Convention focusing on preventing and combating violence against women and domestic violence.