Every day women's rights continue to be violated at work, as they carry out poorly paid, invisible and precarious jobs against a backdrop of harrassment and the threat of violence.

Every day, women around the world are making an invaluable contribution to the global economy through their paid and unpaid labour. Far too often, their work is poorly paid, invisible and precarious, carried out against a backdrop of harassment and the threat of violence. One in three women globally will experience violence in their lifetimes.

The enduring presence of these twin injustices – women’s economic inequality and violence against women and girls (VAWG) – are a manifestation of the global community’s failure thus far to tackle the systemic and structural causes of gender inequality.

Drawing on participatory research with women ActionAid works with in Uganda, Cambodia, India and Brazil, this report highlights their experiences of oppression and exploitation – including for economic gain – through the patriarchal structures and systems that permeate the modern global economy. It further shows how the violence faced by women and girls is linked to their economic exploitation, creating a self-reinforcing cycle. This situation has not come about by accident, but is a product of conscious policy choices to advance favoured economic development strategies.

Daunting as the challenges appear, the good news is that what is created by choice can equally be dismantled and replaced. Encouragingly, both issues are rising up the international development agenda, creating new opportunities to open up the debate and reveal the links between the two issues. Injustices that were previously in the shadows – such as VAWG and women’s disproportionate responsibility for unpaid care – now have pride of place in the Sustainable Development Goals. This achievement is just the latest result of the efforts of women’s rights organisations (WROs) and feminist movements over the past century, building on previous international agreements and treaties hardwon by their campaigning.

There is an urgent, life-saving need for these lofty commitments to translate into action. If they do, the potential exists to create a new virtuous cycle: one in which improvements in women’s economic status and lowered exposure to VAWG and its effects bolster their social and political participation enabling them to demand accountability from governments and ultimately to challenge harmful patriarchal norms at the heart of policy-making. 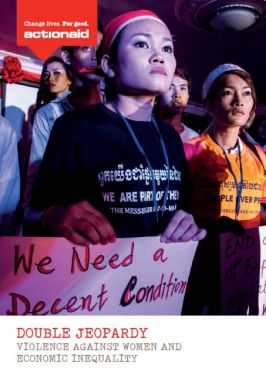