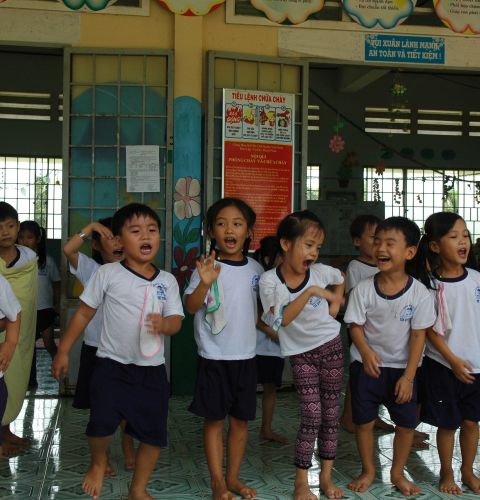 ActionAid began work in Vietnam in 1989. Our work is focused on supporting women's rights, tackling hunger and helping provide quality education for children in Vietnam. Find out more about Vietnam, including facts, statistics and more about what ActionAid does to support communities.

As of April 2021, ActionAid’s coronavirus response has reached more than 46,000 people in Vietnam.

Vietnam’s economy has been hard-hit by the pandemic: countless companies have closed or laid off staff, leaving many women unemployed. We’ve been working to protect the most vulnerable in the community, including distributing essential hygiene items and running awareness-raising campaigns to inform people about the virus, how to prevent its spread and what to do if infected.

But we urgently need your help to reach more people in need. Please donate to our coronavirus appeal today.

Why we work in Vietnam

The Vietnam War, which ended in 1975, killed an estimated three million people, flattened cities and destroyed much of the country's infrastructure and farmland.

Since then, Vietnam has undergone significant economic and political reform which has transformed the country. Vietnam’s economic growth is amongst the highest in the world. Poverty rates plummeted from 58% in 1993 to 3.2% in 2016, and Vietnam has ambitions to be declared a developed nation by 2020.

But there are still stark disparities between the lives of the richest and poorest communities in Vietnam. Rural children are twice as likely to have stunted growth as children living in urban areas. People from ethnic minorities are three times more likely to live in poverty.

Vietnam has the second highest number of women in parliament of any country in Asia, and has one of the largest female workforces. However, nearly one in seven women work in informal labour, with few rights. Domestic violence is high, with three out of five women experiencing some form of violence in their lifetime from their partner. One in 10 girls is married by their 18th birthday.

As climate change disrupts rainfall and food prices soar, many of the most vulnerable communities in Vietnam are struggling to feed themselves. Forty per cent of the poorest children are suffering from stunted growth due to malnutrition. 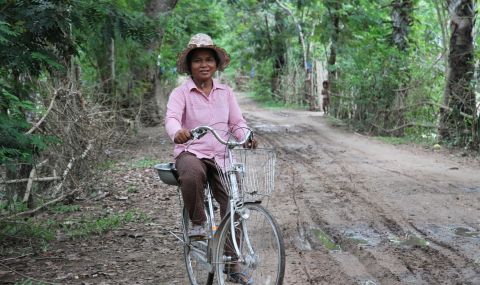 Neang Sarath, 45, a farmer and a member of the community rice bank of ActionAid’s partner ADIFE in Svay Rieng province. Photo: Savann Oeurm/ActionAid

What we do in Vietnam

ActionAid staff deliver training in women’s rights to local communities across the country and we support them to lobby their own government for change.

We also run girls’ clubs in schools where girls can learn about their bodies and empower them to understand and assert their rights to have an education, live free from violence and marry if, who and when they want.

We support people to boost their crop yields, by helping them improve their farming practices and we campaign with them to change policies that drive up the price of basic foods.

Women and girls in Vietnam are responsible for almost all the household tasks, from cleaning to cooking and growing food. This unpaid labour is rarely acknowledged as ‘real’ work and girls often miss out on studying and playing in order to help their mothers with domestic chores. This can often make them fall behind in school.

In 2015, ActionAid was invited by local rights groups to speak with over 1,200 women and men living in the Hoa Binh region about of the impact of unpaid labour, such as child care, household chores and fetching water.

We also trained families about the long-term benefits of sending girls to school. After the training, many women reported that their husbands and sons were sharing tasks previously done by women.

Nguyen Thi Anh lives in in a mountainous region of northern Vietnam, and in the winter it gets very cold. Most families cannot afford to buy their children a coat, so rather than risk them getting ill on the walk to school or during a long cold day in the classroom, many students don’t go to school in the winter months.

"This coat is from ActonAid, and now going to school in winter will not scare me at all as I can wear my coat every day," Nguyen Thi Anh said.

Why education is so important for girls' futures

Top image: Children at their kindergarten in the Mekong Delta, Vietnam. ActionAid