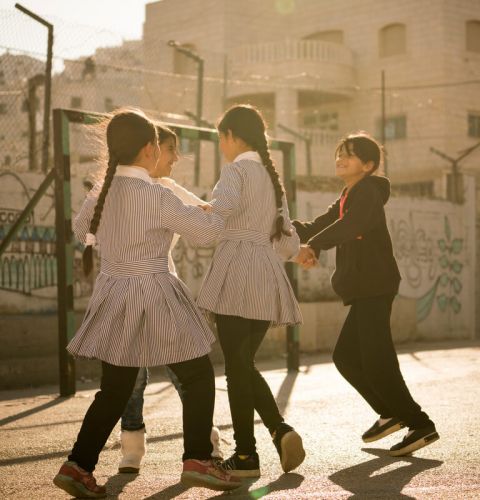 Our commitment to trans inclusion

As an organisation rooted in our human rights based approach, ActionAid UK (AAUK) amplifies the voices, and prioritises the rights of the most marginalised people and communities.

We focus on building trust through collaboration and reflection and aim to continually learn and improve so AAUK can be a brave and safe space for all.

Over the past few months, we have been looking closely at how we can be a truly trans inclusive organisation. We recognise that our trans colleagues face barriers and deal with issues that the majority of cis colleagues do not.

As part of our Diversity and Inclusion programme we have created an internal statement for our staff setting out our commitment to being a trans inclusive employer and detailing what they can expect from us.

We are committed to making AAUK a place where everyone we work with feels welcome, equally valued and free from discrimination of any kind. This includes all trans women, trans men and non-binary people.

When we talk about women and girls, we include trans women and girls and we work to ensure that no one is excluded, discriminated against or disadvantaged because of their gender identity or expression.

Over the coming year, we will be taking this work forward with our global colleagues, exploring the reality of trans inclusion in the 40+ countries where ActionAid works and learning how to be better allies to our trans colleagues and rights-holders through our work with women and girls living in poverty.

ActionAid UK (AAUK) is a trans-inclusive organisation and employer. We aim to ensure that non-binary and trans colleagues feel represented. We are serious about our commitment to equality, diversity and inclusion which is at the core of our culture and commitment to universal human rights. When we talk about women we include trans women and when we talk about men we include trans men.

ActionAid UK has a commitment to inclusion, tolerance and respect, and rejects all forms of violence, hate, stigma and discrimination. This includes any form of discrimination based on gender expression and identity. We know there is more to do and are committed to continually learning and improving so that AAUK can be a brave and safe space for all.

What’s the difference between sex and gender?

We recognise the reality of physical bodies. We also recognise that most – yet not all – bodies fall broadly into the categories of what we often term ‘typically male’ and ‘typically female’.

Sex, though, isn’t a single factor and is comprised of multiple factors including genitalia, internal reproductive organs and chromosomes. These don’t necessarily all match up in ways that we assume, or fall into ‘typical’ ranges.

ActionAid UK believes in everyone’s fundamental right to self-determine their own identity. Enabling bodily autonomy for all is a key part of our work, particularly for those individuals (often women and girls) whose bodies are most likely to be the subject of control.

We recognise that trans women, trans men and those who identify as non-binary often face specific discriminations and increased levels of violence based on either their gender and/or perceived gender, and/or their physical body.

Do you support trans men and boys, and non-binary people?

ActionAid UK believes that trans rights are human rights. Whilst women and girls' rights remain at the heart of our work, we neither discriminate against men or boys (including trans men and boys) or non-binary people, nor refuse to help them. For example, when we respond to emergencies and disasters, we support everyone in the community – providing immediate relief and setting up long-term projects that help them rebuild their lives.

We recognise that we need to work closely with whole communities to change entrenched views, advance women’s rights and achieve our overall objective of eradicating poverty.

What steps is ActionAid UK taking to be inclusive and supportive of trans colleagues?

ActionAid UK has a firm commitment to diversity and inclusion. This extends from our recruitment process to ensuring that we address unconscious bias and dismantle the power structures that disadvantage members of underrepresented groups, including members of the LGBTQI+ community, within our organisation.

We expect all cis colleagues – those whose gender matches what they were assigned at birth – to be allies to trans people (e.g. spending time educating themselves, speaking out if they think they may be witnessing discrimination, harassment or abuse) and we invite the LGBTQI+ community to work with us on this journey and to be internal advocates. We aim to ensure that all colleagues have the freedom to express themselves fully.

In addition, a representative from the network is on our Inclusion Reference Group which focuses on ensuring that barriers are identified, and solutions co-created.

We acknowledge that there is still a lot to do and are committed to working with both internal colleagues and external experts to help inform future actions.