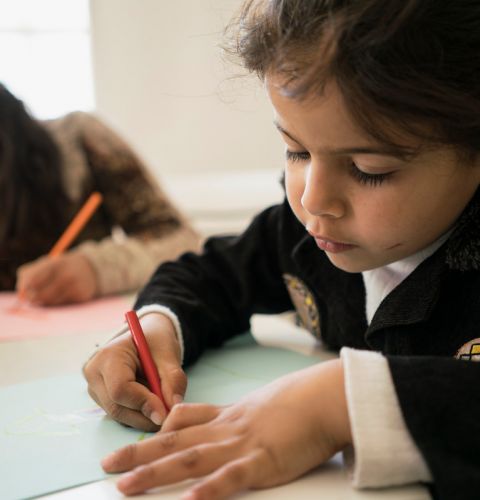 ActionAid has been working in Jordan since 2005, as part of the ActionAid Arab Regional Initiative (AA ARI) which is our cross-regional approach in the Middle East.

We focus on supporting refugees as part of our humanitarian response, promoting youth participation in politics and support women's rights in Jordan.

Find out more about what we do in Jordan and the impact we are making on the ground.

We are urgently working to support people in Jordan amid the continuing coronavirus pandemic.

Thanks to ActionAid donors, we have reached hundreds of people across Jordan as part of our response: distributing cash assistance to people living in poverty, running awareness-raising campaigns to prevent gender-based violence, and offering psychosocial support to survivors of violence.

Please support our work by donating to our coronavirus appeal today.

Why we work in Jordan

We support refugees, women and young people in Jordan who suffer discrimination because of their gender or age.

The ongoing conflicts in Syria and the occupied Palestinian territory has resulted in several million people seeking refuge in Jordan.

In Jordan, there are 71 refugees per 1,000 inhabitants, making it the second-highest density of refugees in the world.

Over 600,000 Syrian refugees are registered in Jordan1 , and it is estimated that over 2 million Palestinian refugees also reside in the country.2

The vast majority of displaced people and refugees in Jordan are women and children, who are in a particularly vulnerable position.

Countries in the Arab region have the highest regional youth unemployment rate seen anywhere in the world.3

Young people are in a particularly disadvantaged position, as they are socially marginalised and have limited space to exercise their democratic rights.

This is particularly pronounced amongst women who face additional social, cultural, and legal restrictions due to their gender.

Violence against women and girls

Discrimination continues to prevent women and girls in Jordan from realising their social, political, and economic rights and is often perpetuated by law.

For example, an ActionAid study in Jordan found that one in five women experienced one or more forms of violence in the workplace, with violence and harassment occurring on the way to and from work, 40% of the time.5

There are also increasing safety risks as the Syrian crisis approaches its ninth year.

Women and girls from refugee communities are subjected to sexual exploitation and trafficking. There are reported instances of Syrian refugee girls and women being sold into 'temporary' or forced marriages to Jordanian men, which in many cases leads to forced prostitution.6 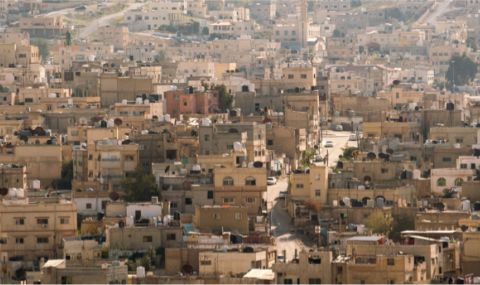 A general view of Zarqa, Jordan. Zarqa is located in the Zarqa River basin in northeast Jordan. The city is situated 15 miles (24 km) northeast of Amman. Photo: ActionAid Sharron Lovell/ActionAid

What we do in Jordan

We have established women's circles in Jordan to build the resilience of refugees, and other vulnerable women and children affected by the Syrian crisis.

Combating violence against women and girls

We work closely with local feminist groups to challenge authority, discrimination and violence, in both domestic and public spaces.

We are starting a pilot project in partnership with a national mobile network operator in Jordan and women's groups.

The project will roll out a low-cost, women-designed mobile platform to provide vital and up-to-date information.

Women can access information on their rights, local services, safe spaces, confidential referrals and the ability to report incidents via this platform.

Women and girls in Jordan are particularly vulnerable to discrimination including street harassment.

We work with local organisations to help change social attitudes to sexual harassment of women, train male and female students, and empower communities.

We empower public service providers to create or improve services for women, such as health services, public transportation, and safety whilst using public spaces.

We are working with feminist school graduates in Jordan who are demanding change for survivors of violence and helping women to assert and claim their rights in the legal system.

Training refugees on their rights

When the conflict in Syria began, Feda fled to Jordan with her five daughters, leaving behind their house and their money.

Her husband decided to stay back but has since remarried and doesn't send any money to support the family.

Feda first came to to the Zaatari camp in Jordan, but it felt unsafe and life was difficult. The bathroom and kitchen were far away from their shelter and they had no electricity or food.

Sometimes I don’t have enough money to buy food for my children."

It was while living in the Zaatari camp where Feda found out about ActionAid.

She met other women through women's safe spaces and learnt about her rights.

ActionAid provided her with training and resources, and Feda has now found a job as a cleaner and her daughters have started to go to a local school.

My one hope is to go back to Syria.”

Five-year-old Safa outside her home in Mafraq, Jordan.

Five-year-old Safa lives with her twin sister, Marwa, her brothers, Mohammed and Ali, and her parents in Jordan.

They left Syria in 2012 because her mother, Radwa, was frightened for her children after an airstrike hit their house.

Since the family left everything behind, they don’t have enough money to care for their children and to buy medicine for their sick father.

The family has received essential items from an ActionAid distribution, such as shampoo, nappies and clothes wash.

Learn more about our humanitarian response

Top image: Maria, 6, draws at an ActionAid centre in Zarqa, Jordan. Her family has been living in Jordan for three years since they fled the crisis in Syria. Sharron Lovell/ActionAid