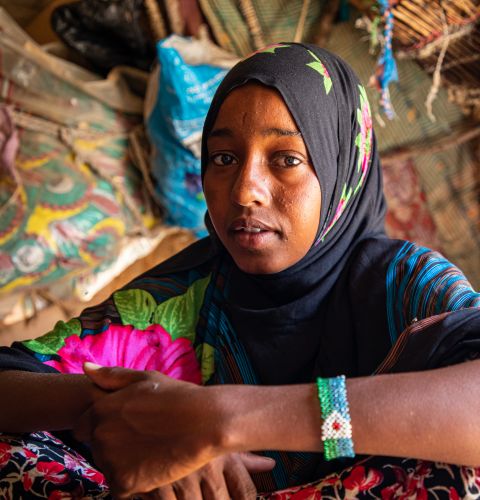 Somaliland is an autonomous region of Somalia where ActionAid works to end hunger and respond to drought, prevent FGM, get children into school and support women to earn a living.

But years of severe drought and disasters driven by climate change have pushed people in Somaliland to the brink of crisis.

Find out more facts and information about Somaliland and ActionAid's work supporting communities.

Drought and hunger in Somaliland 2022

Somaliland, along with Ethiopia, Kenya and Somalia in the Horn of Africa, is facing one of the worst droughts on record with 14 million people in the region at risk of hunger, following late rains and rising temperatures.

The 2017-2021 East Africa drought has already caused a humanitarian crisis in Somaliland, with millions of people in the area facing hunger and water shortages.

Now, women and girls who rely on farming for their livelihoods are being hardest hit by the prolonged drought. They are travelling hours on foot in search of water and grazing pastures for their livestock, and food and shelter for their families.

Find out more about this crisis

Why we work in Somaliland

Somaliland declared independence from Somalia in 1991 after a war that claimed hundreds of thousands of lives.

A self-governing, autonomous area in northern Somalia, it has its own government, police force and currency, however, it is yet to be recognised internationally.

Unemployment is widespread and around a tenth of children die before their first birthday.

In 1992, ActionAid Somaliland opened its first office and began working with local partners to rebuild conflict-scarred communities and equip women with the tools they need to combat injustice.

Somaliland is incredibly vulnerable to extreme weather conditions and regularly suffers from drought. Since half of Somaliland's rural population are nomadic pastoralists who rely on livestock rearing, hunger is rife.

Women and girls often lack a strong voice in society, as decisions in the home and government are made almost exclusively by men.

In Somaliland, 97% of girls aged between four and 11 have endured female genital mutilation (FGM), a brutal procedure that can cause death and countless health complications.

Low literacy rates and limited awareness of legal rights also make women vulnerable to domestic violence and sexual abuse. After the war, Somaliland’s education system collapsed. While schools are reopening and primary school enrolment increasing, the quality of education is poor and many teachers remain unqualified. 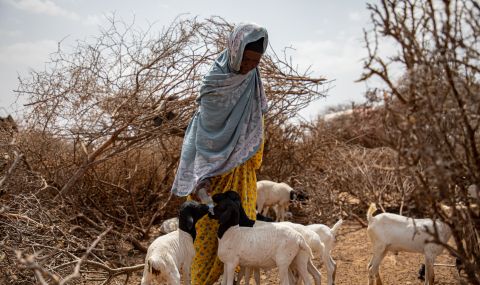 Aisha, a 60-year-old pastoralist in Somaliland has had to migrate to find water for her livestock. Photo: Daniel Jukes/ActionAid

What we do in Somaliland

Our work in Somaliland displacement camps

Our work ending hunger in Somaliland

ActionAid works to end hunger among small farmers and pastoralists in Somaliland.

We work mainly with women who are left to fend for themselves when men migrate to cities or coastal regions in search of water for cattle. We provide tools such as rakes, pickaxes and tractor rental to help increase harvests and improve nutrition.

Getting children into school

In 2014, we ran a campaign which brought education ministers face to face with more than 1,000 parents to discuss how to get children into school.

ActionAid now works with parents and teachers to build classrooms and separate toilets for girls and boys, and with the Ministry of Education to develop training programmes for newly qualified teachers.

These raise awareness of the importance of girl’s education, and challenge the view that FGM and early marriage are safe ways to protect girls from pre-marital sex.

We are working to end FGM in Somaliland by helping communities to learn and openly talk about its damaging effects, running youth groups to help boys and girls speak up to end FGM, and supporting groups to lobby governments to help pass anti-FGM laws.

Women are at the centre of our work, but to end FGM we need whole communities to say no, so including men is essential.

Through our work, teenage boys and men are publicly declaring that they will not marry women who have had the cut and are being powerful ambassadors.

With large populations of displaced people, and high levels of poverty, Somaliland is highly vulnerable during the coronavirus pandemic.

Our teams are working to support the most vulnerable communities - we have directly reached more than 243,000 with life-saving aid, while our awareness-raising projects across local radio stations have reached 1.5 million people.

We are distributing food parcels, including flour, sugar, rice, cooking oil and tinned fish, to vulnerable households, and addressing the specific needs of women and girls by providing hygiene kits, containing menstrual products.

Please donate now to our coronavirus appeal and help us reach more people in need.

Fadumo, 50, is a pastoralist and widow forced from her home due to repeated droughts where she lives in Somaliland.

It’s been over two years since the area has experienced significant rainfall and the once green oasis has been transformed into an near-inhabitable wasteland. Fadumo says:

“[The drought] caused the livestock to be unhealthy and damaged the land, and it brought financial problems as well. I was a herder. I owned about 100 to 200 heads of livestock. Only about five survived…”

Fadumo is now fearful that if the situation continues to worsen, she may be forced to migrate yet again.

For rural communities like hers, land and livestock are key to survival, but after years of drought she has been left with nothing.

Her father didn't want her to have it, but her mother organised it while her father was away on a trip, as she thought the social consequences of not being cut outweighed FGM's damaging effects.

"It was very painful," Zeinab told us.

I always remember. I can still hear the sound of the cutting."

Having FGM has caused Zeinab serious health problems for the rest of her life. Now, she is determined that the next generation of girls does not face the same trauma.

As women’s rights coordinator of ActionAid Somaliland, she is leading a programme that is training boys and girls, men and women, to understand the harmful effects of FGM.

Find out more about FGM