The wrong model for resilience

How G7-backed drought insurance failed Malawi, and what we must learn from it.

The G7-backed African Risk Capacity (ARC) drought insurance policy was an experiment that failed Malawi, and in particular its women, in the face of a drought that need not have become a disaster. The insurance, for which Malawi paid US$5 million (m), failed to deliver on its promise of timely assistance, which 6.7m food-insecure Malawians so sorely needed, due to major defects in the model, data and process used to determine a pay-out. After the declaration of a national emergency in April 2016, uproar at ARC’s decision that no pay-out was warranted was eventually followed by agreement in November to pay Malawi $8m. But this payment, made only in January 2017, was too little, too late and e ectively represented an economic loss to Malawi1. In the meantime, the Government was left pursuing conventional means of raising money to buy food for its hungry citizens, with the total drought response costs estimated at $395m.

This technical failure has brought home to Malawian policymakers and stakeholders the more fundamental poor value for money of the drought insurance model so strongly promoted by the G7, the World Bank and other powerful development actors, and how their scarce resources could better be spent. Not one of the government of cials with key roles in climate risk management or other expert national stakeholders we spoke to would choose to renew the insurance policy. Instead, they would use the money for no-regrets adaptation and resilience-building options that are proven to work but severely under- resourced. They would invest in making their social protection system more integrated, scalable, adaptive and universal; or supporting more climate-resilient, sustainable agriculture and more irrigation; or adequately resourcing decentralised disaster risk reduction (DRR) and enhancing the network of weather stations; or saving at least some of the money each year in a contingency fund for disasters.

The women farmers we spoke to additionally called for more inclusive extension services and more training in how to run their popular village savings and loans schemes (VSLs) and potentially grow them into cooperatives. They were unfamiliar with insurance and wary of  nancial institutions. They were already using a form of risk management through the emergency fund in their VSLs, but needed support to expand this. 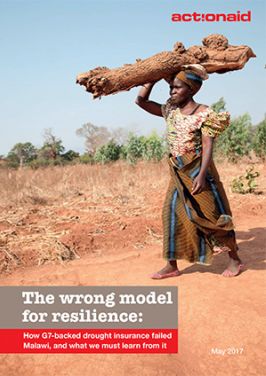