Ebola virus is a death sentence, and more Ebola myths

As the Ebola outbreak extends its grip on Guinea, Liberia and Sierra Leone, global concern has escalated, especially now that nations including the USA and Spain have reported some sporadic Ebola cases. It's time to dispel some myths about the virus. 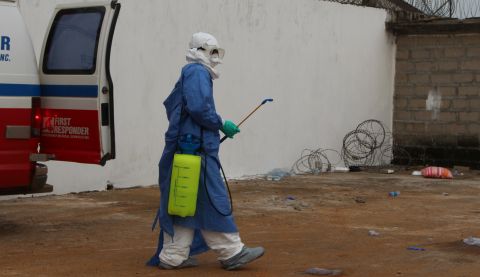 While the Ebola outbreak is undoubtedly a humanitarian disaster for West Africa, global panic and fear has caused worldwide confusion about the disease. This is not only unnecessary but is also diverting attention and resources to western nations and away from the real battle to contain the disease and save hundreds of thousands of lives in West Africa.

That’s tricky to answer. If you are in the wrong place at the wrong time and don’t take basic precautions when dealing with infected patients, Ebola is easy to catch.

Certainly in West Africa every person with Ebola is currently infecting a further two people. But that’s not as contagious as other diseases such as measles where one infected person can cause infection in a further 16 to 18 people.

Doctors consider that highly unlikely. Ebola’s incubation period ranges from two to 21 days and scientists believe that people do not carry enough of the virus in their blood before they exhibit symptoms.

Casual contact with someone who is not showing symptoms should not spread Ebola. That includes shaking hands. Even kissing is thought to carry little risk unless someone is just about to develop a fever and has started bleeding from their gums.

You must have very heavy amounts of the virus in your bloodstream to pass Ebola on. Once symptoms emerge, people become more contagious as they get sicker and are still contagious after they die. That’s why the management of the sick and of dead bodies is so important in stemming the outbreak.

You can catch Ebola just by touching someone with the disease

It’s not as simple as that. The infected person must have large amounts of the virus in their blood to transmit Ebola and that can only be via bodily excretions; so blood, urine, diarrhoea, vomit, semen and perhaps sweat – although doctors are not certain about that last one.

Even so, transmission can only occur via contact with mucus membrane – that's through contact with the mouth, eyes or nose – or through a break in the skin. It's also why it is very important to wear protective gloves and face masks and disinfect regularly when dealing with people who are ill; people with Ebola lose control of their bodily functions and can bleed spontaneously.

Ebola is just like HIV and AIDS. You can catch it through having sex with an infected partner

Ebola is not HIV. It’s always sensible to be very careful about sexual partners and practices but as Ebola is only thought to be transmissible when showing symptoms – fever, vomiting, diarrhoea, weakness and severe aches and pains – having sex prior to having a fever is not necessarily a problem.

The only exception is after a man has recovered from Ebola because the virus is still present in semen for three months after infection. It’s important to remain celibate after recovery or at the very least to use condoms.

Once you’ve got Ebola you’re definitely going to die

Ebola's certainly very dangerous but not necessarily a death sentence. While the current West African outbreak has a death rate of seven in 10 that’s because poverty is the engine that drives Ebola. People who are poor are often not fit enough to withstand infection. Health services are weak, underfunded and now overwhelmed.

Sierra Leone and Liberia had less than 200 doctors in each of their countries before the epidemic and very little in the way of equipment or medicine. But if you seek early treatment and notify the authorities you stand a much better chance of living.

Travel bans won’t work. They are not policeable and anyway seeking to isolate the problem in West Africa is not dealing with Ebola.

Screening has its uses but the most effective screening happens at the point of departure, not entry, because it only picks up people who are already displaying symptoms, not carrying the virus. High quality departure screening is a key part of the efforts of the international community to strengthen wider health services into the region, but it is just part of the solution.

The best way to protect West Africa and indeed the world from the Ebola outbreak is to ensure that all efforts are made to tackle the virus at source on the ground.

There is absolutely no chance of that. Ebola is not airborne – which would be much more dangerous – and universities and drugs companies are working flat out on a vaccine. And there is reason to be hopeful about that. We’re already in Phase 1 of drug trials and will move to Phase 2 in the New Year and Phase 3 a few months later.  Keeping the costs low and rolling out mass vaccination programmes will be crucial.

In the meantime, massive and sustained medical intervention coupled with prevention programmes should halt the epidemic if there is the political and financial will. The danger right now is that the global community is not doing enough in West Africa. That means we may fail to bring this outbreak under control in time to avoid devastating consequences for the people in the affected region.

Don’t be silly. The UK has detailed risk processes in place which have been updated since the outbreak and all medics, from GPs to hospital A&Es, work to an early warning cascade system.

Generally, the western world has excellent health services and infection control procedures which will quickly contain any outbreaks. They also have the resources to learn from and overcome the type of weaknesses in health systems that we saw recently in the USA and Spain.

And we can also take confidence from Nigeria's response. As soon as an Ebola case was announced, they swiftly responded with effective surveillance and containment based on their battle to combat polio.

ActionAid staff are working around the clock to stop the spread of Ebola and save lives in West Africa. Please help us.

With thanks to Mike Noyes, ActionAid UK's Head of Humanitarian Response and Dr Colin Brown, Infectious Diseases Lead for the Kings College Sierra Leone Partnership for their advice in writing this blog.