How do people around the world celebrate periods?

In some countries around the world, families and whole communities celebrate a girl reaching puberty as a coming-of-age occasion.  Find out how periods are acknowledged and celebrated from the UK to Japan. 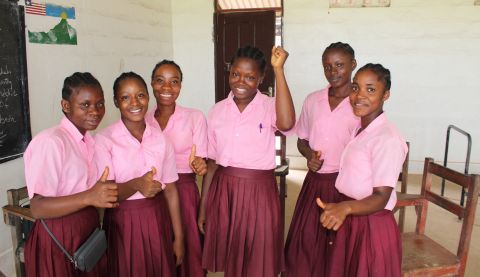 In many parts of the world, period stigma and taboos mean women and girls are excluded from regular day-to-day activities like attending school, or earning a living. In some cases, women and girls are even prevented from living in their homes, eating certain foods, taking part in religious activities or socialising while they are on their period.

From girls in Malawi who are told they can't cook with salt while on their period, to girls being forced out of their homes to live in huts in Nepal - period taboos are pervasive.

However, there are some customs and cultures around the world where periods are acknowledged and girls reaching puberty is fêted.

Girls from the Amazonian Tikuna tribe (indigenous people who live in Brazil, Colombia, and Peru) spend three months to a year living in private rooms in their family homes after they get their first period. During this ‘pelazon’ time girls learn the history of their tribe, study its music and learn their beliefs from other tribe members.

It is a rite of passage for all girls entering womanhood. This period ends with a celebration and the girls are welcomed back into the community. Unlike similar practices like Chhaupadi where girls in Nepal are relegated to sheds or huts during their periods, girls from Tikuna tribe consider the pelazon as a positive occasion where they can focus on themselves and learn about their heritage.1

In Fiji, some communities lay out a special mat for girls on their first period and teach girls about the importance of this milestone. One the fourth day of their period, an occasion called ‘tunudra’, the girls' families prepare a feast to celebrate their daughters' entry into womanhood.2

In some south Indian communities, a girl’s first period is welcomed through a coming-of-age ceremony called Ritusuddhi or Ritu Kala Samskara or a half-sari function. The girl receives gifts and wears a traditional outfit called Langa Voni which is a skirt and sari outfit, also known as half-sari.

This ceremony marks the transition of girls who have reached puberty and are now mature enough to understand their responsibilities towards family and society.3  However, there is still shame and stigma surrounding periods in other parts of India.

In some places in Japan, when a girl first gets her period the family celebrates by eating a traditional dish called sekihan made of sticky rice and adzuki beans. The red colour of the dish symbolises happiness and celebration.4

The Native American tribes in North America pay tribute to girls reaching puberty with a celebration called The Sunrise Ceremony. The ceremony involves different rituals where girls from the tribe receive and offer gifts. The girls wear symbolic outfits and celebrate with a feast.

The North American native culture considers the shift from childhood to adulthood as a critical moment in the life of their children and they observe several coming-of-age rites to assert their traditional and community values.5

While not a cultural celebration per se, in early 2020, free sanitary products such as pads and tampons will finally be offered to girls in all English primary schools to counter the effects of period stigma and period poverty.6

The Department of Education in the UK recognises period poverty and stigma as a barrier to education and has extended its pledge to support primary school girls in attending school and fully participating in class, which is a step forward in the right direction.

Cultures around periods are changing

We appreciate that cultures and traditions vary within each country, region and even within the same community. Cultural customs are not stagnant and culture is always in flux and can change. Also, we know that not all communal rites are egalitarian and hence should not be romanticised. But in a world where period shame and stigma is nearly all-pervasive, these few celebrations and achievements are small victories in realising our sexual and reproductive rights.

How ActionAid celebrates periods and sexual and reproductive rights

In Nepal we worked with local partners to set up 11 ‘chhaupadi-free’ communities, and as a result more than 1,400 women have stopped practising chhaupadi.

We have established awareness-raising initiatives, and people’s beliefs around menstruation are changing.

Find out more about the work we do to end period stigma and menstruation taboos.

How can I help?

Free sanitary pads for students in the UK is an important initiative, but in many countries over the world girls have little to no sanitary protection and end up missing school.

You can help us provide free sanitary pads and set up more girls' clubs and forums by donating to help us end period poverty and period stigma.