We are shining the spotlight on some of the dangers that women and girls face when disasters strike. Hear directly from the women and girls who are bearing the brunt of crises around the world. 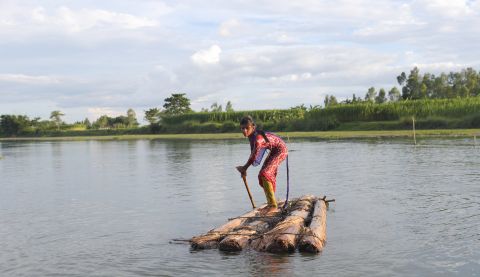 Adori, 13, has to cross flood water to attend school in her village in Bangladesh. Photo: Karin Schermbrucker/ActionAid

Climate change isn’t just changing our weather; its consequences are a daily reality for millions of people around the world.

But when intense rains fall more frequently causing floods, or spells of drought last several years, it’s usually women and girls that struggle to survive and recover from the aftermath.

This is because women and girls already face inequalities and discrimination – because of their gender – which compound and multiply when disasters strike.

From our work in countries like Somaliland and Bangladesh, we know that climate change-related crises are already instigating deep, life-altering changes for some of the poorest and most marginalised women and girls in the world. Here are some of their stories.

1. Increased risk of violence against women and girls

In a camp for displaced people in Somaliland, two sisters, Hibaq who is just 15 and Nimco,19, lie awake at night listening to any sounds that may alert them to men walking into their makeshift shelter which has no proper doors. Some nights they don't sleep at all for fear of being attacked. 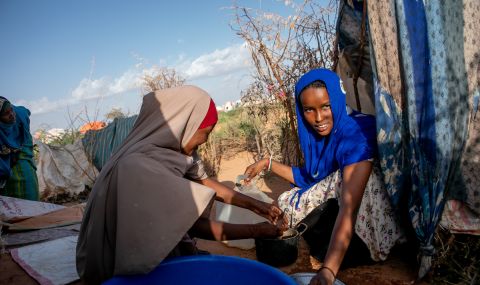 Sisters Hibaq and Nimco are living in a makeshift shelter in Somaliland. Photo: Karin Schermbrucker/ActionAid

For Hibaq this is her new reality.

I feel insecure because we have a very poor shelter. Sometimes, the thieves come in and try to harm us. It’s so scary… the thieves don’t want to take any material things, they want to harm women. So, that’s why they don’t look for our things. They just want to attack women.”

Climate change-related events - whether slower onset disasters like droughts or sudden ones like hurricanes or cyclones - can mean women’s homes and neighbourhoods can become uninhabitable.

As a result women and girls may be forced to migrate to camps for displaced people where living under temporary tarps or bare, plastic sheets can expose them to violence from strangers.

Sathi, 14, was also forced to move into a camp after her house flooded in a small village in Bangladesh.

At night I cannot sleep. There was no door. Just a plastic sheet was above our heads. My mother never slept. She was worried for me and my sister.”

When the floods hit Bangladesh two years ago, Sarmin suddenly had to face the prospect of getting married at the tender age of 14. Her parents were struggling after they lost everything in the floods and they felt that marraige into another family would keep Sarmin well-fed and safe. 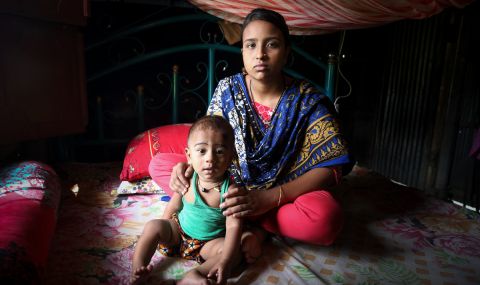 Sarmin was married at 14 years of age when the floods struck her hometown. Photo: Karin Schermbrucker/ActionAid

Because of poverty parents marry off their daughters like me at a very early age. I cannot go to school since I got married. Life is tough for girls of young age in the village.”

When a disaster strikes, girls can be more vulnerable to child marriage than usual. In some places they are considered an extra burden in times of crisis.

For poor families who have lost their homes and livelihoods, child marriage can be seen as a ticket out of – or at least, a way to diminish the effects of – crippling poverty, whilst also ensuring the perceived security of their daughters from violence.

3. More likely to miss classes or drop out of school

In a northern district of Bangladesh, in a small rural village, 13-year-old Adori clutches her books tightly as she wades her way through knee-high water to get to school everyday. Sometimes she misses her first class even though she loves going to school and adores her books. 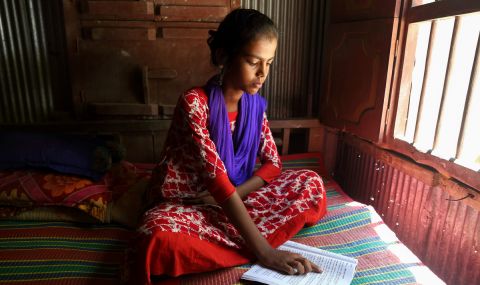 Adori missed her class when her school closed shut the floods in hometown. Photo: Karin Schermbrucker/ActionAid

But after the floods this year, Adori's father left to find work in the city and Adori found that her workload at home increased. She started to help her mother more at home by looking after her baby brother, fetching water and doing the household grocery shop at the local market.

In times of crises, girls are often forced to drop out of school or miss classes because household chores become a strain with fewer family members available to share the pressures at home. Girls are often enlisted to take care of family members, or to help with domestic chores such as cooking, cleaning or finding water, and school is considered a lower priority in times of need.

The floods also made Adori's route to school more treacherous. She has to walk a few extra miles each day, since the floods destroyed her usual road that she took to go to school. This means she often misses her first class.

Sometimes whole schools are destroyed in a crisis or even closed for long periods of time.

I love to go to school and never miss or not attend... (but) last one month our school was closed because of flood. I felt bad and missed...school so much."

4. Increased risk of death and injury

25-year-old Shefali paints a bleak picture of survival during the floods in Bangladesh.

My sister was pregnant and she delivered in the middle of water. There was no help and I was with her....pregnant mothers cannot swim this distance and often tend to stay in the house which is more dangerous." 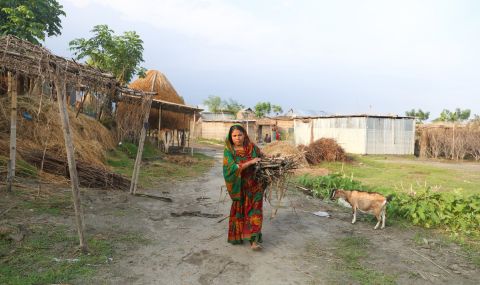 Shefali witnessed many people getting injured and dying in the floods. Photo: Karin Schermbrucker/ActionAid

Marginalised women and girls, the disabled and the elderly are more vulnerable to death and injury in the face of a disaster.

Due to their traditional given roles as caretakers, women and girls often stay back in a disaster to protect their children or adults in their care while men sometimes escape.

Not only that but deeply ingrained social norms sometimes dictate that women and girls sometimes have to wait on permission from the men in the household to leave their houses. In some places, women are also often unable to escape when caught by sudden floods or earthquakes as they are not encouraged to learn to swim. 1 .

5. It affects the availability of food and chances of earning a living

Imagine that you live in a pastoral or farming community and the food you eat every day comes from the crops you grow daily or the livestock you rear for milk, meat or for selling in return for cash. Nafisa lost her food and source of income after the drought in Somaliland. Photo: Karin Schermbrucker/ActionAid

Now imagine the same land you rely on slowly dries out or gets inundated with water and destroys a season's worth of crops.

This is the reality facing Nafisa, from Somaliland. The 20-year-old mother was part of a pastoralist family that owned several animals which they reared for their food and income.

Years of climate change-related drought, dried out her land and killed off all the livestock, leaving her family without any food or money to survive. At the same time, her husband took her children and abandoned her.

Our life was so good because we had our livestock. We used to eat, drink milk, sell [the animals], make butter… it’s so painful when you have a small baby and you have nothing.”

In many rural communities, men control the income in their households. Women who rely on men for economic support are left struggling in times of crisis when men either abandon their families, or leave to look for work elsewhere or are even killed by disasters.

Women in rural communities have limited access to and ownership of their land as well which directly impacts the food they have available to eat.

While across the world, in Bangladesh, Shefali, 25, talks about the lack of food after the floods in 2017.

We lost our crops. Our small goat died in the flood water. Cows are sick. My children suffered a lot during flood. Now we have no crop in our storage. I, along (with) my husband have to work in people’s fields to bring food (to) our table. Life is becoming harder every year after floods."

Donate to help women girls living in a crisis

Girls like Adori, Nafisa, Sarmin, Sathi and Hibaq are living in temporary camps.

Floods and droughts have destroyed their homes and they have nowhere else to go.

Your support could provide women and girls around the world with food, water, survival kits and safe toilets so that they can survive the climate change affecting their lives right now.