8 weird and wonderful facts you didn’t know about cycling

Whether you're a roadie, newbie, Boris biker, a fixed-gear freestyler or a Shoreditch hipster cyclist - here are some fun facts that you probably didn't know about your beloved two-wheeled friend. 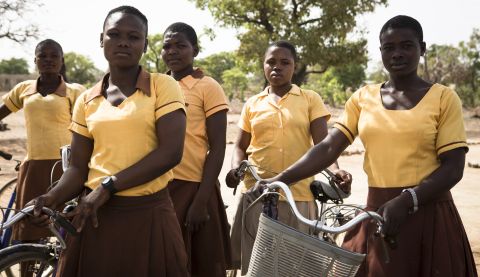 Theresa (left) and her friends were given bikes by ActionAid so they could travel to school safely in northern Ghana.

How much do you know about your trusty bicycle? Find out our top ten facts about cycling and if you're feeling inspired, why not sign up to take a cycling challenge with ActionAid?

Now for the most important bit.

By signing up for a cycling challenge with ActionAid, you can use your passion for cycling to help change the lives of women and girls around the world.

We'll support you every peddle of the way with fundraising tips and handy resources. So what are you waiting for - why not saddle up and get ready to make a difference?