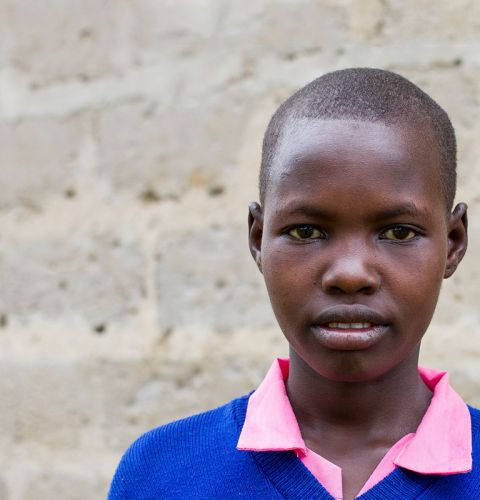 Purity was just 12 years old when her parents decided she should undergo female genital mutilation (FGM), a life-threatening practice with serious implications for girls’ futures.

She said she was willing to take the risk of running away from home, rather than be forced to be cut. Not only are the medical consequences severe, but many girls never return to school after being cut, and are forced into child marriage.

When Purity ran away, she sought refuge at a safe house in Kenya for at-risk girls. The safe house is one of many organisations supported by ActionAid to help protect girls, educate communities about the risks of FGM, and end its practice, for good.

Thanks to ActionAid donors, Purity was able to safely escape FGM, and she is now getting the education she deserves. But there are many more girls like her who need our help: across Africa, three million girls are at risk of FGM every year.

No girl, anywhere, should be subjected to this dangerous and damaging procedure. Please donate £7 a month to help end FGM and ensure girls like Purity can grow up without fear.

Your donation can help end FGM

What ActionAid does to end FGM

Female genital mutilation is a traditional practice that’s been going on for thousands of years, and as such, is deeply entrenched in social, economic and political structures.

FGM is illegal in many countries, including the UK, but because the laws aren’t always well enforced, and many people in rural communities are unaware of them, the practice still goes on.

We believe that bringing an end to female genital mutilation requires changes in attitudes and behaviour at all levels of society.

Donate now and help us to end FGM for good

ActionAid is an international charity that works with women and girls living in poverty.

Our dedicated local staff are changing the world with women and girls. We are ending violence and fighting poverty so that all women, everywhere, can create the future they want.

We operate in rural and urban communities across Asia, Africa and Latin America.

We're committed to ending the cycle of violence in communities around the world, enabling women's economic empowerment, and supporting women's and girls' rights during humanitarian crises.