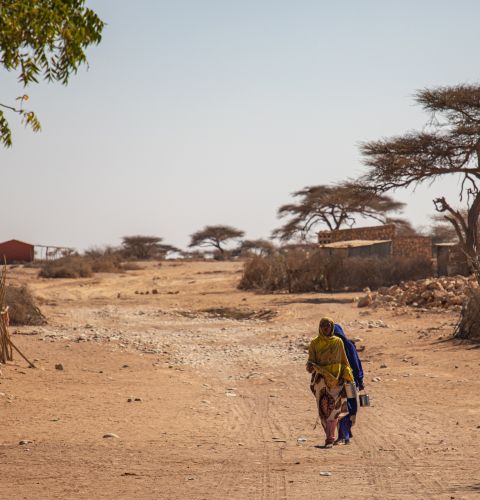 Drought ranks among the most damaging of all disasters: it is known to cause more deaths and displace more people than any other natural hazard.

Millions of people are affected by drought or water scarcity every year, although it is estimated that by 2025, 1.8 billion people will experience absolute water scarcity, and 2/3 of the world will be living under water-stressed conditions.1

Find out more about drought, what it is, what causes it and how women and girls are the hardest hit by drought.

East Africa is facing one of the worst droughts on record with up to 20 million people in Ethiopia, Kenya, Somalia and Somaliland facing a severe food and water shortage.

Millions of people in the region are still recovering from the devastating drought in 2017. But now, little or no rain in 2022 has killed more livestock and destroyed extensive farmland. Rising food and energy prices due to the war in Ukraine, are also now pushing families to the brink of survival.

A drought is defined as extended period - a season, a year, or several years - of unusually dry weather and low precipitation for a region, which often results in a shortage of water.2

It can cause crops to fail, drinking water to run out and livestock to die, which may lead to food insecurity or, in the worst case, famine.

It can also have wide-ranging indirect consequences, including higher risks of fire, higher migration rates and conflict.3

Drought occurs naturally in almost all regions of the world.

It is caused by weather patterns, as well as weather events like El Niño in the Pacific ocean.4

Although it occurs naturally, climate change is making drought worse in many parts of the world, increasing its frequency, severity and duration.5 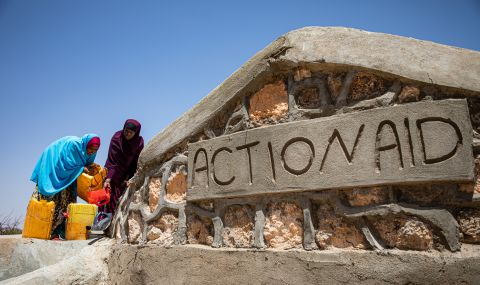 Amina (left) fills up her jerry cans with some water provided by ActionAid, after severe drought killed off her livestock and crops in Somaliland in 2022. Photo: Daniel Jukes/ActionAid

Why drought can devastate communities

Drought is difficult to forecast - and it cannot be stopped. When it is not managed effectively it can have huge socio-economic consequences, including mass migration, famine and death, as well as long-term degredation of natural resources.6

But the severity of drought depends on a number of other issues present in a region, including:

Why are women and girls hardest hit by drought?

As in all emergencies, women and girls are nearly always hardest hit by drought. They are often responsible for care-giving in their families, which means walking increasingly long distances for water, putting them at greater risk of violence and sexual assault.

Owing to cultural customs, women often eat least, and last, in their families, increasing their risk of malnutrition.

Within the home, women can also often face aggression and domestic violence as the burden to find food and water increases.

Meanwhile girls are usually the first to be taken out of school in order to help support the family.

They may even be forced into child marriage in order to ease the burden on their family.

As a result of the drought women and girls face a triple burden in some cases: to survive, care for their families and evade sexual violence in the process. Urgent action is needed to avert severe hunger, sexual violence and community breakdown.”

Amina, 40, is a mother and a farmer in Somaliland.

Lack of rain and rising temperatures this year have meant that Amina's livestock no longer has much pasture to graze on. In addition to selling milk from her livestock, Amina is also dependent on her crops, and without water, she has lost their entire livelihood.

She says: "I have seen severe droughts for the last few years, [but] in my view, this is the worst drought.

There are many people who can't cook tonight and many others who can't get water because water sources are far from them. So water and food are the most needed elements.”

ActionAid is helping people like Amina in Somaliland with access to water and helping them rebuild their livelihoods. Help us support more people in need in East Africa.

Like tens of thousands of others in Somaliland, Dahabo has been forced to flee her home due to the catastrophic drought.

Before the drought, she'd lived a comfortable life as a pastoralist.

She owned 100 camels and sold milk and meat to make a living.

She was forced to make a dangerous journey in order to find a place to stay, ending up in a temporary camp for displaced people.

There, she and her cousin Safia and relied on the generosity of strangers, before receiving help and support from ActionAid.

ActionAid is delivering life-saving supplies in displacement camps in Somaliland, and supporting vulnerable women and girls who are at increased risk of sexual violence and abuse.

In high-risk countries around the world, ActionAid works with communities to build their long-term resilience to drought, including by:

In a drought emergency, ActionAid and our local partners work to save lives in affected communities, putting women and girls at the heart of our response, including by:

After a devastating drought in Zimbabwe, Alice was struggling to survive and provide her two children with enough food.

The lack of water in her region was causing a spike in the number of waterborne diseases, as people were forced to drink dirty water from a nearby river.

But ActionAid supported Alice's community by building a borehole in the community.

Not only has this reduced cases of diseases like typhoid, but it also means Alice doesn't have to walk long distances for water.

This means less of a chance of being exposed to violence or harassment.

ActionAid works to develop long-term, sustainable solutions in communities like Alice's, so families can become more resilient to the changing climate.

Ceel-Dheere in Somaliland is experiencing its worst drought crisis in a decade. Millions are&nbsp;being forced from their homes in search of food and water.&nbsp;Daniel Jukes/ActionAid