Another world is possible Volume 3: Ensuring a just transition

This is the third volume of four.

It has long been argued that the prevailing economic system serves to both exploit and exacerbate women’s relative position of economic, social and political exclusion. As the world emerges from the Covid-19 pandemic it is crucial that human rights and climate & social justice drive social reform. This must redress gender inequalities at the national level as well as power imbalances between the Global North and Global South, which intensify gender inequalities.

The report is made-up of a compendium spread across four volumes. This is the third volume of four.

There are three volumes that complement this volume:

Volume 4: Building the conditions for feminist economic alternatives to flourish 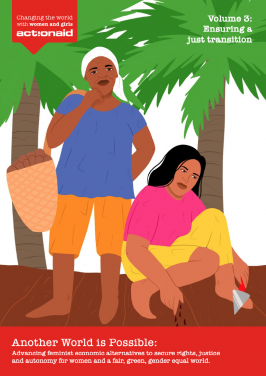