Southern Africa food crisis: “I don’t know how we will cope”

ActionAid’s Ed Watkiss discusses the situation on the ground in Zimbabwe, in the midst of an escalating food crisis that’s risking millions of lives in Southern Africa. 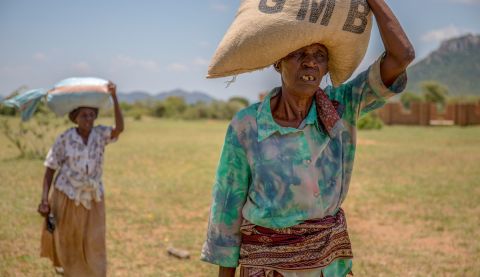 Nine million people are currently facing severe food shortages across Southern Africa - a number that’s expected to increase to an estimated 45 million in the coming months.

Ed Watkiss, a member of ActionAid's humanitarian team, recently returned from a fact-finding trip to Zimbabwe, where he saw first-hand the impact of this emergency.

Find out what it's like on the ground in Zimbabwe in the midst of this escalating crisis - daily life, the resilience of Zimbabweans, and why the emergency isn’t getting the international headlines it deserves.

Q: What is the situation like for people in Zimbabwe?

A: There is a lot of fear and loss of hope.

Many smallholder farmers have not had a good harvest for two or more years, and are almost at the point of giving up on this year.

The erratic rainfall has forced farmers to replant their maize seed almost four times - a clear indication that the rainfall pattern has changed.

The rains for many have been almost two months late, so even if there are enough over the next two/three months (until the traditional end of the season), they may not have enough time for crops to grow. However, the rains are still patchy so it’s likely many will face another year of minimum harvest.

Meanwhile, the continued advance of Army Worm, a highly destructive moth larvae, threatens those who have managed to grow maize and other staples.

On top of this, in Zimbabwe the economy continues to lurch from crisis to crisis.

This most immediately affects the urban population - especially the poor - but also those who would be offering jobs to them. Businesses are struggling and reducing their workforce.

Zimbabweans have a long history of resilience and maintaining hope in the face of adversity... but this is starting to crumble.

It’s hard to see when the natural crisis and economic crisis will end, or even how it will end.

Q: What would people normally being doing this time of year?

A: It’s summer now in southern Africa, and the middle of the traditional crop cycle.

Smallholder farmers would be tending their crops, weeding, looking out for pests and manuring to encourage strong “cob” growth.

It’s the “lean period” so food is at its most scarce, but there would normally be the promise of new crop maturing with early harvest at the end of February.

That promise isn’t being made at the moment, and in many areas hunger is becoming more acute each day.

Q: What do you expect the situation to be like in one week, six months, or one year?

A: The next couple of weeks will be the breaking point.

It’s almost too late to think of recovering anything from this year’s growing season, if you don’t have a crop above knee height.

There needs to be a rapid assessment of this season’s potential harvest, to inform the international community before it’s too late.

There could be enough food harvested to last one or two months, but then the region is likely to face ongoing shortages.

Without substantial international intervention, the region (and especially Zimbabwe) will see unprecedented levels of malnutrition, hunger and mortality.

Early intervention is key, followed by consistent support for at least 12 months.

Q: What is it like on the streets of Zimbabwe?

A: Confusing. On the surface in towns, things we may take for granted take a lot more effort (getting money, affordable food, clean water, electricity, fuel etc), but life goes on.

Nonetheless, there’s a growing sense that something a lot worse is about to happen.

There’s a repeated pattern in any conversation you have.

After the often lengthy greetings on how you are, your family, others you may mutually know, it turns to rains (not so good again), the economy (crazy prices, no money, I hear there’s petrol at so-and-so), the government (no comment), ending in “I don’t know how we will cope”.

I don’t know how we will cope”

Q: How are women and girls in particular being affected?

A: I can quite confidently say that women and girls are facing an increased risk of domestic violence and sexual exploitation.

ActionAid and others are working hard to address women's protection, but the issue is not yet being consistently measured, or addressed with full coordination.

The few bits of anecdotal evidence that do appear talk of withdrawal of girls from school, an increase in child marriage, and sexual exploitation.

It is critical that this dimension of the crisis impact is further recorded, highlighted and actively addressed.

Q: What is ActionAid doing to support women and girls?

A: As is the norm with ActionAid’s programming, our focus is on women and girls’ protection in a crisis and on promoting women’s leadership.

In Mozambique, Zambia and Zimbabwe, our projects have at their core the question of how we can reduce the harm and burden on women and girls.

In Zimbabwe, we are seeking EU funds to enhance the protection of women and girls against exploitation and violence across all humanitarian projects…those of UN, DFID and other donors.

Q: What is the biggest challenge for people at the moment in Zimbabwe?

A: The coming together of drought and economic turmoil.

When there is a crisis you will have a number of coping mechanisms to mitigate the effects. You’ll have savings, or can sell livestock or other valuable items.

But in an economy where the currency devalues daily, your savings become worthless.

With the lack of cash and increasing poverty, the market for livestock is so poor you get very little in return.

And given the scarcity of some staple foods, when they are on the shelves they are so expensive that they are out of reach. Those living in poverty are dependant on handouts and remittances from relatives.

Q: What role has the climate crisis played in this disaster?

A: A critical role.

There have always been droughts in this part of the world, and people have found ways to cope…up to a point.

But the frequency of failed rains, additional cyclones and heat waves are overwhelming the previous coping pathways, which have already been weakened by macro-economic and political mismanagement.

Q: Why isn’t this crisis getting a higher profile in the media?

A: For many, it would seem the emergency is coming across as 'just another drought'. Just another crisis. ‘What will change?’

Slow-onset, slowly developing crises like these struggle to find space in the media until there are alarming images to show, by which point it will already be too late for the people affected.

The result is little-to-no media coverage, despite the crisis affecting tens of millions of people and an enormous need for international help - there are even fears that official numbers of those affected by hunger and being underreported, and could be far greater.

Q: What would you say to someone who wonders how they can help?

A: Please share this blog on social media, and help us to urgently raise awareness of this escalating crisis, before it's too late.