Earth Day: 7 things you can do to fight climate change

Find out what Earth Day on 22nd April is about, and see how you can fight climate change and make a difference to the planet and its people with some simple lifestyle hacks. 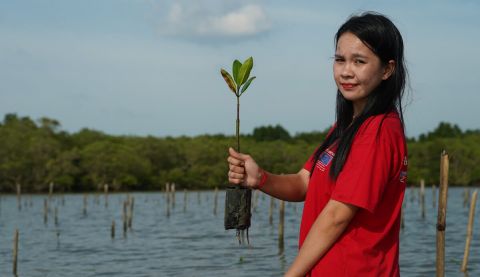 Earth Day is celebrated on 22nd April across the world. It was first commemorated in 1970 to tackle environmental issues like climate change. It also marks the start of the modern environmental movement.1

We know that climate change is very real, and it's happening right before our eyes.

Disrupted rainfall patterns are leading to increased and widespread floods like those in Bangladesh, Cambodia, Italy and the UK.

Drought is more and more common in places including Australia, California, Kenya and Somaliland, causing devastating wildfires and destroying the habitats of millions of people and animals.

We need to cut our carbon emissions in half by the end of the next decade."

According to Kimberly Nicholas, associate professor of Sustainability Science at the Lund University Centre for Sustainability Studies (LUCSUS) in Sweden, humans need to cut our carbon emissions almost in half (45%) by the end of the next decade to reduce the effects of a climate crisis.2

Sometimes, the idea of climate change and seeing its repercussions unfold can cause ‘eco-anxiety'3   - a condition where we feel overwhelmed and helpless at such a huge and complicated problem, and guilty about our own part in it, feeling that we can't make a difference.

But there are several small steps that individuals can take right now that will help create meaningful change for the planet, its habitats and its people, and will go some way to help us feel more in control.

You can reduce your impact on the climate by making some simple lifestyle changes.

The global water crisis is getting worse. Around the world, 1.42 billion people live in areas of high or extremely high water vulnerability4 . This means water is growing scarce; in terms of both physical shortages, and of access to supply due to inadequate infrastructure.

Unpredictable rain or extended droughts caused by climate change further affecting our water supply. Next time you brush your teeth, try turning the tap off. This can help save six litres of water per minute!5

2. Change your bulbs or switch the lights off

Switching to energy-efficient lightbulbs that produce less heat and last longer, or turning off lights when you’re not home or in the room, can help save energy.

A study showed that turning off lights could have a bigger impact on reducing carbon dioxide emissions from power stations that supply electricity than previously thought.6

Swap out single-use-plastic water bottles and cups for reusable ones.

Why? Sunlight, heat and biodegradation can cause plastics to break down into microplastics. These fill up the oceans and can release greenhouse gases like methane into the air, which cause global warming7 .

4. Ditch the car for public transport, a bike or a walk

Transport is a significant contributor to air pollution, and car pollution specifically is a major cause of global warming.

One study has ranked going car-free as one of the most effective actions individuals can take to help reduce emissions. Moving away from driving a saloon (or sedan) car to taking public transport has been shown to reduce emissions by 26%–76%.8

If you have to drive, choose a small car. A large car emits 85% more greenhouse gas emissions than a smaller one.9  Or choose a more energy-efficient vehicle like an electric car.10

Cutting down on meat and switching to a more plant-based diet can help fight climate change, and is a less harmful use of our land and forests.

Industrial food production is the second biggest contributor to climate change after burning fossil fuels like coal and gas.

Beef production is devastating forests to make way for animal grazing. It is also estimated that 1800 gallons of water goes into producing one pound of meat.11

Want to learn more about your own impact on the environment? You can calculate your carbon footprint and balance or offset the cost by donating to projects fighting climate change.

Donate the cost of your carbon footprint to ActionAid and help women and girls fight climate change.

Women and girls living in the world's poorest countries have done the least to cause climate change. But they're often the ones suffering the most from its effects.

Just £3 a month, over a year could help plant 200 trees to reforest land and prevent flooding.

Give before 4 June and your donation will be doubled by the UK Government as part of our She is the answer appeal.