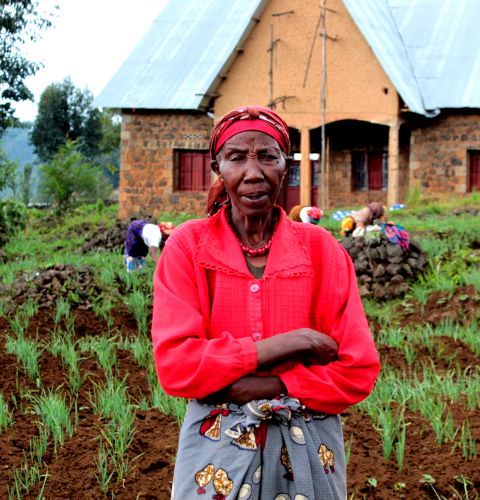 As rising global temperatures are threatening the world we live in, ActionAid is developing and delivering sustainable agricultural practices to curtail and even reverse some of the disastrous effects of climate change around the world.

Find out more about what agroecology is and the various different ways it helps those most affected by it - women and girls who rely on land and natural resources for their food and livelihoods.

Also known as ecological agriculture, agroecology is a way of farming and managing crops, livestock, forests, fisheries that is viable, long-lasting, resilient to climate change, and offers various other environmental, social and cultural benefits such as addressing food and water scarcity, and poverty.

What is the difference between climate-smart agriculture and agroecology?

Despite some broad similarities, climate-smart agriculture and agroecology have fundamental differences.

It relies on temporary carbon-offsetting schemes1 , the continued use of fossil fuels, genetically-modified seeds, chemical pesticides, intensive factory farming, biofuel production (destroys rainforests) and industrial-level monocultures (the growth of a single type of crop in a field which weakens the soil and the plants).2

While agroecology is a more radically transformative way of farming as it puts agriculture back into nature.

It champions a holistic approach which takes into account the experience of farmers and indigenous people and combines it with evidence-based, natural agricultural practices that promote self-sufficiency.

Agroecological approaches are the most effective means of adaptation to climate change. By improving the health, structure and nutrition of soil through the use of compost, manure, mulching or green manures, they reduce erosion, improve plant health, and increase the ability of soil to absorb and retain water in times of both drought and flood.3 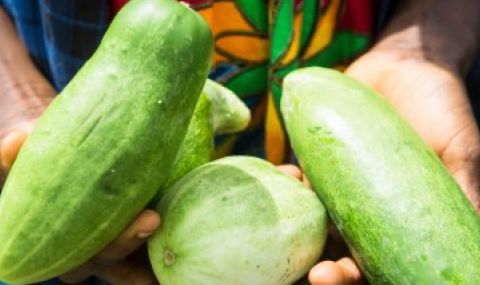 How are industrial agricultural practices affecting the environment and climate change?

Many current farming practices rely heavily on industrial methods such as intensive planting of large areas of one single crop, cultivation of genetically-modified plants, harmful use of antibiotics in animal rearing, synthetic fertilizers and hybrid seeds, all designed to maximise production without considering the ecological and social consequences.4

For example, some livestock release methane and nitrous oxide through their belches into the air which contribute to global warming. Methane is also transmitted through manure and some synthetic fertilisers release nitrous oxide emissions as well6 .

How do synthetic fertilisers contribute to climate change?

When applied to the soil, these fertilisers can release Nitrous Oxide (N2O), a highly potent greenhouse gas that has 298 times the atmospheric-warming effect of carbon dioxide.

Synthetic nitrogen fertilisers can cause stable organic matter in the soil to convert to carbon dioxide emissions in the atmosphere.

Agribusiness giants, whose core business model is built on the sales of these synthetic fertilisers assert that they offer solutions to climate change, but these claims should be treated with a high degree of scepticism.

Trees and forests are key to addressing biodiversity7 and climate change as they absorb greenhouse gases like carbon dioxide from the air and help stabilise the earth's climate.

But as demand for food grows, an increasing number of forests and natural habitats are being destroyed8 to pave the way for more and bigger farmlands and pastures.

Large-scale farming that allows for substantial production of crops usually encourages monoculture farming. That is, it requires growing the same, single crop repeatedly on the same soil making agriculture highly dependent on chemical pesticides and fertilisers.

This single-crop monoculture practice has left many crops weak and exposed, and their soils exhausted.

Growing the same kind of crop in the same place season after season and fertilising them with chemicals and using artificial pesticides depletes the nutrients that the plant needs. The crops become weak, stunted and come under attack from pests and diseases.9

Planting the same crops, year after year has disrupted the natural makeup of the soil affecting its nutrient content, its structure and its ability to retain water. A weaker soil can become dry, impermeable, infertile, more susceptible erosion, flooding, landslides caused by extreme weather,  and unable to sustain future production of crops and ensure the food security of people and animals.

Different pests are attracted to different crops for their varying nutritional needs, so reliance on any one type of crop makes farmers vulnerable putting them at risk of losing everything10 they have carefully grown and threatening the food supply of millions of people.

It also has a significant effect on water usage –there is a disproportionally high use of water often drained from lakes, reservoirs, rivers for single crops.

Crop rotation is important to maximize the growth of plants and crops and control pest attacks.

Climate change-related events like severe weather have a direct impact on agriculture and as a result, on our food security.

Not only does already fragile, weak soil stands very little chance against these potent and unusual weather patterns, but droughts and floods bring their own problems.

For example, climate change-related disasters were one of the leading causes of food crises in 2017. They make growing food less reliable, reducing access to food and increasing food prices.11

In many places that ActionAid works in Africa, Asia and Latin America, small-scale farmers have been complaining that the raining period is starting later and later in the year and ending earlier than usual.

Droughts and dry weather can result in low or irregular rainfall and cause poor pasture growth. In Somaliland, repeated spells of drought have dried out crops and fodder resulting in the death of livestock and affecting families' food supplies and livelihoods.12

Floods are caused by heavy rains and storms that make the soil too water-logged and wet for crops to grow. Without adequate soil drainage, plants cannot access the nutrients and oxygen that they need to grow.

In Bangladesh, persistent floods have wiped out crops and destroyed infrastructure blocking roads and preventing relief from reaching people putting millions of people at risk of food insecurity.13

As a result, farmers are having difficulties to define when to plant, when to harvest and crop failures are becoming more common than before.

Additionally, the recent spate of pest invasions in Africa and Asia have also been linked to climate change.

For example, the locust swarms of 2019 and 2020 that plagued East Africa and devastated thousands of hectares of natural vegetation, pastures and crops are thought to have been a result of heavy rains and unusual storm activity in the region.14

1.3bn
Over 1.3 billion people in the global south are relying on agricultural land that is slowly degrading.16

Do you know what all the terms in farming and agricultural science mean? Here is a list of the various words you may come across on our climate change hub.

Agrochemicals are chemical products used in farming such as fertilizers and pesticides.

The practice of planting trees and shrubs alongside crops.

Biofuels are fuels like biodiesel and  ethanol produced from

Climate resilience is the capacity to deal with climate-induced events and recover from them.

Crop rotation is the practice of growing different types of plants on the same part of soil.

A drought is defined as extended period - a season, a year, or several years - of unusually dry weather and low precipitation for a region, which often results in a shortage of water.

Fertilisers are food for plants and provide nitrogen, phosphorus and potassium so crops can grow faster and bigger. They can be organic or inorganic.

Floods are described as sudden onset events where normally dry land is inundated with an overflow of accumulated water that it is unable to absorb.

Mangroves are trees grown in salty, coastal waters that attract fish and fight against climate change.

Monoculture is the practice of growing a single crop in a large area of land year after year.

Polyculture is the practice of growing several different types of crop on the same land either through crop rotation or intercropping.

Soil erosion is the shifting or wearing away of the topsoil by water, wind or farming.

Soil salinity is the amount of salt in the soil. The salinity of soil can increase after flooding or rising sea-water levels.

Sustainable fishing ensures the balance of the marine ecosystem by respecting the rate at which fish reproduce, ensuring the survival of different fish species and making sure those who rely on fishing for their livelihoods can maintain their income. 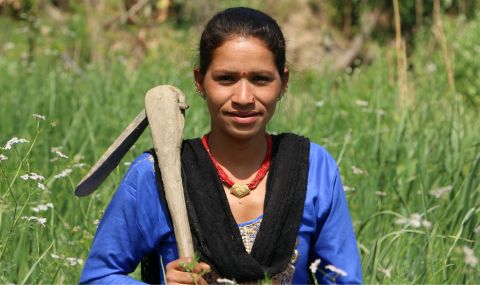 How does agroecology help people and the climate?

To secure access to food for everyone for years to come and to ensure we avoid the worst of climate-change-related-disasters means we need to maintain and improve our soil, water sources and biodiverse ecosystems.

We know that industrial agriculture favours large farms, encourages the use of synthetic fertilisers, chemical pesticides and weedkillers to achieve economies of scale and, as a result, disempowers small farmers, degrades the environment and makes climate change worse.

More and more, the evidence shows that small, single family-based farms that use agroecological techniques are vastly superior to industrial farms18 : they are highly efficient, sustainable, resilient to climate change, and offer multiple other social, cultural and environmental benefits.

What are agroecological principles and techniques and their benefits?

Agroecology is farming based on a combination of traditional, decentralised, community-owned and sustainable practice with science.19

What does ActionAid do to help farmers, communities and fight climate change?

An estimated 500 million family farms represent over 90% of all farms globally and over half of these farmers are women.23

Women farmers face unique constraints because of gender bias such as not having decision-making powers, low rural wages, poor funding, lack of access to information, land and resources, unpaid care work responsibilities, and limited exposure or access to markets to sell their produce.

I thank ActionAid for working with us in this community as many families have improved their way of farming especially how to grow varieties of crops in the same farms."

40-year-old Pili from Tanzania used to grow just one crop on one plot of land over several years. Eventually, her soil became infertile and stopped yielding crops.

ActionAid supported Pili and her community in crop rotation, the importance of growing leguminous crops, preparation and use of natural pesticides, and how to keep the soil fertile. As a result, Pili and her family harvested more produce this year than ever before.