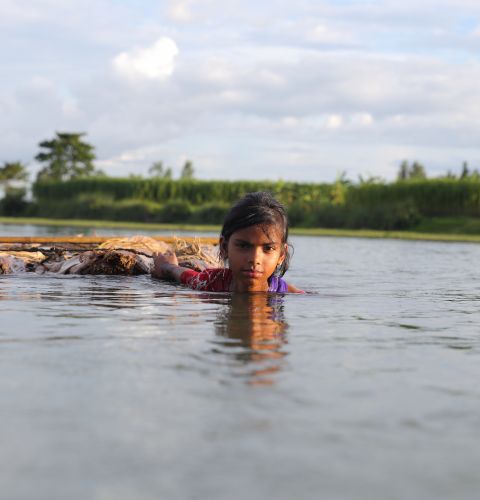 Climate change has increased the frequency and intensity of floods, and other natural weather-related events that we are witnessing around the world.

Find out how countries can experience both droughts and floods, and how they affect people's resilience and capacity to adapt to disasters.

Floods are described as sudden onset events where normally dry land is inundated with an overflow of accumulated water that it is unable to absorb.1

There are several types of floods with differing speeds such as flash floods caused by heavy rain, river floods which are seasonal and coastal floods associated with cyclones and tsunamis.

The frequency and intensity of floods that we are witnessing globally can be caused by several factors.

For example, degradation of soils and the ecosystem due to unsustainable development makes it increasingly difficult for lands to absorb the waters from heavy rains.

The combination of erratic and increasingly intense rainfall – that is increasingly difficult to plan for – with poor ongoing land management and degradation, makes certain regions and communities particularly vulnerable to flooding.2

Communities based in coastal regions are particularly at risk because they also face the threat from sea-level rise and storm surges. All of this is further exacerbated by little or poor flood planning and management3 . 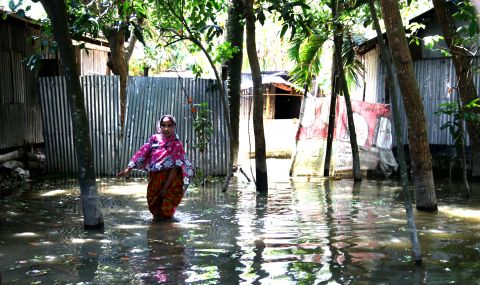 At least 5.7 million people in 31 districts have been affected by floods and 98 people have died. Photo: Md. Sariful Islam/ActionAid

How is climate change connected to flooding?

As climate change warms up the atmosphere, the air can hold 7% more water vapour for every one-degree Celsius rise in temperature. When this air rapidly cools, water vapour turns into droplets which join together to form heavy rainfall4 .

Heavy rainfall over a short period of time can cause flash floods or moderate rainfall over several days can overflow rivers or dams.

Countries that have been dealing with high water levels for many years have had the time to adapt – for example, the Netherlands which has created the world’s most sophisticated flood barriers.

But historically regions that haven't had to deal with such heavy rains may not have adapted, making them more vulnerable to dangerous flooding.

Low-income countries with poor infrastructures may be less equipped to prepare for and prevent floodings such as Bangladesh, Haiti and Vietnam.

Antarctica has lost about 3 trillion tonnes of ice in the last 25 years causing global seas to rise by 8mm. In the future sea levels could rise as much as 5 meters5 .

How does flooding affect women and girls?

Women and girls are more likely to live in poverty than men and face more discrimination and violence that can heighten during crisis or periods of instability.

Women and girls are particularly vulnerable to a climate-change-related event like flooding in the following ways. 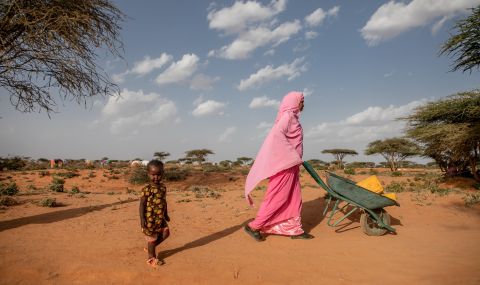 Hibaq Mohamed (age 38 yrs) goes to the nearest well point to collect water in the IDP camp where she lives with her 8 children. Photo: Karin Schermbrucker

Why doesn't drought end when it rains heavily?

It is common for areas that experience drought to also be susceptible to intense rains and flooding.

For example, Somalia and parts of Somaliland can experience heavy rain, but they have also experienced more periodic droughts. These droughts have occurred due to shorter rainy seasons and sporadic and unpredictable rainfall.

Recurrent droughts dry out soils and land. But intense rain over dry land does not necessarily mean less drought.

Heavy, intense rainfall tends to run off the surface of soil, washing away any nutrients on the top instead of gently soaking it. Cracked, arid land caused by drought is also unable to soak up the moisture fast enough.

Even if a heavy rain breaks a drought it is usually for short periods of time, and a return to irregular rain patterns means water in the soil is used up or evaporates quickly again. To grow crops and sustain livestock, farmers and communities need a steady, regular pattern of rainfall that gently soaks the land.

The unpredictability of the weather makes it more and more difficult for vulnerable communities to plan ahead and adapt to changes in the weather.

48-year-old Leiwia lives in the small pacific island of Erromango in Vanuatu which is already prone to cyclones and flooding.
It is now one of the countries most vulnerable to the impact of global warming.

The impacts of rising sea levels, flooding and cyclones in the country have the potential to affect the local women's livelihoods and food security.

Established as a part of ActionAid’s response to Cyclone Pam, "Women I Tok Tok Tugetha (WITTT)" forum gave women an opportunity to share their experiences, voice their concerns, discuss access to resources, and influence decision-making in their communities to better respond to climate change.

Leiwia believes that these forums can be an avenue for change and provide a space for the voices of women in her community, and around Vanuatu.

A lot of disasters are coming, and the climate changes. If we come together, mobilise together, talk about those issues… WITTT can help Erromango.”

What does ActionAid do when floods strike communities?

Women and girls are not merely survivors of climate-change-related crises, they are forging ahead and leading change. ActionAid is working closely with them to give them a chance of a climate-positive future.

Slowly our house was going under water. And one night the water increased and it went above my head."

14-year-old Sathi's life turned upside down when her house in Kurigram, Bangladesh flooded and she and her family had to move to a camp for displaced people.

She lost her books and all her belongings in the floods and living in the camps meant fearing for her life.

"The life [in the camp] is very difficult. We cannot go to the toilet, we cannot take a bath... At night I cannot sleep. There was no door. Just a plastic sheet was above our heads. My mother never slept. She was worried for me and my sister. "

Displacement caused by floods and other climate-change-related events can expose women and girls to violence.

Camps may not have adequate sanitation facilities or lighting so women and girls feel unsafe making their way to campsite or offsite toilets.

ActionAid works to develop long-term, sustainable solutions so families can become more resilient to the changing climate but also provides food, water, survival kits and safe toilets so that they can survive the climate change affecting their lives right now.

Top image: Adori, 13, has to cross floodwater to attend school in her village in Bangladesh. Fabeha Monir /ActionAid