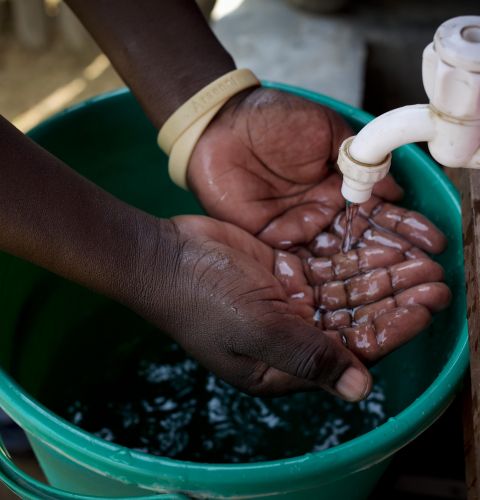 The outbreak of Ebola in West Africa which began in March 2014 was the largest since the Ebola virus was discovered in 1976.

Over 28,000 Ebola cases were reported in Guinea, Liberia and Sierra Leone, and more than 11,000 people died.1  The outbreak was officially declared over in June 2016.

ActionAid has worked in Sierra Leone since 1988, and in Liberia since 1996. Our long-term rootedness in communities meant that our local staff were we were able to respond quickly and effectively when the crisis broke out.

ActionAid was one of the first international agencies to respond to the Ebola crisis. Working alongside health and aid charities in a concerted international effort we supported over 500,000 people in Liberia and Sierra Leone between 2014-16.

2019 Ebola outbreak in the Democratic Republic of Congo

ActionAid responded to an outbreak of Ebola in the Democratic Republic of Congo (DRC) in 2019, where at least 2,500 cases of Ebola were recorded, and at least 1,600 people are reported to have died.1

The World Health Organisation reported that women and children continue to be disproportionately affected by the outbreak. Children under 18 account for almost 30% of confirmed and probable cases, and women account for 57%.

This was the worst Ebola outbreak to have struck the DRC, and the most complex. The outbreak was centred in the provinces of North Kivu and Ituri, which are among the most unstable and densely populated in the country. These provinces are also affected by conflict and armed violence.

On 15 July 2019 eastern DRC's largest city, Goma, saw its first case of Ebola. The infected person was pronounced dead the next day.

There were grave concerns about the spread of Ebola to Goma, as the city is a provincial capital with an airport, and international flights.

Meanwhile in Uganda, 3 new cases of Ebola or death due to Ebola were reported as of 24 June 2019.

Our response was focused on:

The Democratic Republic of Congo is one of the poorest countries in the world. Over 87% of the population live below the poverty line, and ongoing conflicts have driven millions of people from their homes.

We've been working in DRC since 1987, and today we operate in 15 areas across the North and South Kivu Provinces, working closely with local groups who are rooted in communities and have the trust of local people.

We worked with women especially, who are often the first responders in emergencies like this outbreak.

In 2020, the number of weekly reported cases of Ebola in DRC has declined dramatically. The last confirmed case was recorded on 17 February 2020. But the need for vigilance continues.

The impact of Ebola on mothers and children

Princess Paye, 20, is from Monrovia, Liberia. Her husband, Joseph, contracted Ebola while she was heavily pregnant with her first child.

"Joseph got weaker and sicker by the day," she said. "I feared that it might be Ebola after hearing the signs and symptoms at a community meeting. We had been advised by the community chairman that all sick people should be reported so I reported that Joseph was ill and he was taken to a treatment centre.

"I was now left all alone in the house. I was no longer allowed to fetch water from the pump, or go to the market or buy anything. No one wanted to have anything to do with me. A week later I went into labour. I called for help from the neighbours but no one came because they were afraid they could catch Ebola from me."

Princess was told that her husband passed away on the same day that she gave birth. She and her baby, Miracle, were declared Ebola free.

ActionAid supported Princess by ensuring that she has food, sanitary towels, and a kit to help protect herself and Miracle from the virus, including hand sanitiser, chlorine and a handwashing bucket.

Princess lost her partner Joseph to the Ebola virus. He died on the same day that she gave birth to their baby girl.

Ebola virus disease, formerly referred to as Ebola haemorrhagic fever (EHF), is an acute, serious illness. The 2014-2016 outbreak in West Africa had a fatality rate of around 50%.

The first outbreaks of Ebola ocurred in Sudan and the Democratic Republic of the Congo in 1976.

How is Ebola spread?

The Ebola virus is found in the blood, body fluids or organs of a person or animal who is infected. It can be spread by touching someone with the infection who has symptoms or someone who has recently died, by cleaning up bodily fluids, by having sex with an infected person without using a condom, and by handling or eating uncooked bushmeat.

The incubation period for Ebola virus (the time between infection with the virus to onset of symptoms) is two to 21 days. Humans are not infectious until they develop symptoms.

The first symptoms of Ebola virus include a high temperature, headaches, joint and muscle pain and a sore throat. These symptoms can then develop into diarrhoea, vomiting, a rash, stomach pain and reduced kidney and liver function. An infected person may bleed internally, and they may also bleed from the ears, eyes, nose or mouth.

How is Ebola treated?

As of April 2017, there are currently no licenced treatement or vaccine for Ebola, but some potential new vaccines and drug therapies are under development. However, early interventions of rehydration and treatment of the symptoms improves the chances of survival.2

Mariama, 36, is a health worker in Bo District in Sierra Leone. Ebola had a deep impact on her community, as many health workers contracted the disease and died. This meant that other people who were infected with Ebola were too scared to go to the clinic to get treatment.

"Initially we had no protective equipment so we were very scared to touch patients and be able to look after them," Mariama says. "We were supplied with chlorine, soap and gloves by Action Aid, so we were able to keep doing our jobs."

Mariama washes her hands in chlorine in the health clinic in the village of Mbundoru in Sierra Leone.

ActionAid Sierra Leone focused on ensuring that families who had been affected by Ebola had access to food, and that vulnerable children were able to continue their education.

Raising awareness of how to stop Ebola

When the Ebola outbreak began in Sierra Leone, ActionAid started rapid outreach training in rural communities about how to stop the spread of the virus.

Hawa Jalloh, who has volunteered for ActionAid since 2007, was one of the local women we trained to raise awareness of Ebola.

"Before the training we didn't believe it. No one could see it, they thought... the government puts you in a car and sprays you and you die," she says. ​"But they told us Ebola is real. When I came back I gathered all the elders. I told them it is real. We told them the government is fighting to push it from the country, as it is bad disease."

Hawa went from house to house visits, informing families about how best to avoid the disease. "Ever since I told them about Ebola, this familiy has been leaving a bowl of water outside their house for hand washing" she says proudly, indicating a nearby home of mud and corrugated iron.

Hawa raises awareness of Ebola in her community.

ActionAid's response to Ebola in Liberia

ActionAid Liberia focused on supporting schools and communities with Ebola prevention and control kits, and ensuring that the most vulnerable people including women, orphans and survivors had access to psychosocial support and livelihood support.

The long term impact of Ebola

Health services in West Africa were hit hard by the 2014-16 outbreak , with many health workers lost to the disease and already weak systems and infrastructres put under enormous strain. Schools worked to accommodate students who were forced to miss a year of school during the outbreak. Years of progress were lost as economies and markets slowed down. Overall, the disease left the poor even poorer.

ActionAid Liberia and ActionAid Sierra Leone continue to work with communities in the long term. To tackle the ongoing impacts of Ebola, we're helping orphans resume their schooling, we're supporting survivors to find income sources through farming and animal rearing, and we're tackling the stigma faced by families who were impacted by the disease.