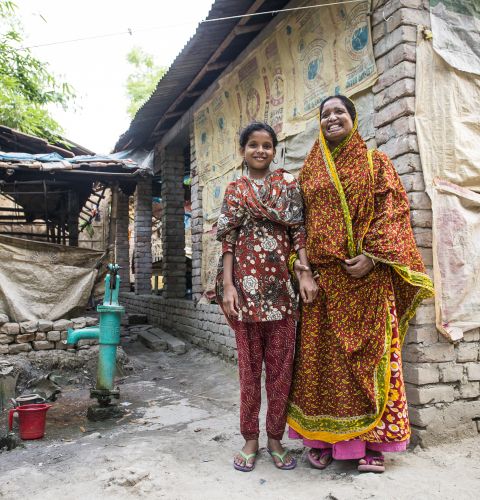 Acid attacks are a form of violence, in which acid or another corrosive substance is thrown at a person - usually a woman or a girl - with the intention of maiming, torturing or killing them.

Women in countries around the world live with the threat of acid attacks. Globally, there are approximately 1,500 acid attacks a year, but it is a crime that often goes unreported for fear of reprisal. The greatest prevalence is in south Asian countries including India, Pakistan and Bangladesh, where acid remains inexpensive and freely available.

Acid attacks on women and girls

Most survivors of acid attacks are women and girls. The most common reasons for attacks on women and girls is the refusal of marriage, the denial of sex, and the sexual rejection of men and boys. It is an expression of control over women's and girls' bodies.

In Bangladesh, where ActionAid works, there have been thousands of acid attacks over the last few years. These include young girls trying to escape forced marriage. In most cases people purposely aim for the face – destroying the eyelids so the eyes remain open – as a woman’s face is seen as sacred. Her disfigurement then becomes a public mark of shame, making it hard for her to get married or gain employment.

By harming the face of the survivor, the perpetrator limits their ability to engage in public life and damages their chance of marriage and having children. Acid attacks against women and girls therefore have a multiplied impact because of the reaction of society to the survivor – something that is surely known by the perpetrator prior to the attack.

Khodaja was attacked with acid while sleeping when she was 15 years old as a result of a land dispute, in Bangladesh

Acid attacks on women and girls in Bangladesh

Khodaja and her baby daughter Sonali were sleeping in their home in Bangladesh when they were attacked with acid as the result of a land dispute with a relative. Sonali was so young at the time that the acid permanently altered the shape of her skull.

Khodaja says: "It took a few days before I became properly conscious of my surroundings. Then I became so worried about the future and the challenges that could come up, because my daughter's face and mine were so distorted. My mother tried to tell me not to feel worried about this. She tried to give me hope that things would improve. Though I didn’t know what the future would hold, I knew it would never be the same”.

After the attack, the family were helped by an ActionAid partner organisation called SoDesh, who put them in touch with the Acid Survivors Foundation. The Foundation was set up to prevent acid and burn violence and to empower survivors of these attacks, especially women and children. They helped pay for the initial medical bills and gave the family counselling.

Grassroots women’s rights organisations are the key to tackling violence against women and girls. With the right backing they can make sure survivors of acid attacks get the support and justice that they deserve and importantly change laws and social practices which allow attacks to take place and for perpetrators to remain at large.

Nurun Nahar is an assistant officer in gender equality and women’s empowerment at ActionAid Bangladesh. She is herself an acid survivor. When she was 15 she rejected the advances of a boy two years older than her, and as a result he came to her house and poured acid on her face.

She knows the struggles faced by other survivors. “Community members don’t treat acid survivors well," she says. "They speak about them behind their backs and to their faces and so acid survivors don’t come out of their homes easily. Also, educational institutions are not supportive of survivors and so most of them won’t return to school or college. Families are also often not very supportive and they blame the survivor. They think if the acid attack hadn’t happened, the family wouldn’t be shamed in this way, and financially they find it hard too because of the costs of the medicines."

With help from ActionAid she founded the Acid Survivors’ Network (ASN), a support group for acid victims.

“I know all the survivors in our network. I could see that they felt so hopeless and that they had no confidence and so I tried to explain to them about how I had changed my life and to show them that if they can change their thinking then they can also change their life. I hope that one day they can have even more success than me and be something even bigger and shine even brighter.

“My dream is to see the Network as a development organisation. I hope it will work so that we can stop this practice of throwing acid on women. We also want to make sure that survivors get proper justice. I hope the survivors can move easily through Bangladesh and that society will accept them as normal people – not just acid victims. I also want to see survivors in Government positions; I want to see them in Parliament. That is my dream.”

The event aimed to challenge conventional perceptions of beauty and celebrate the survivors who are creating positive changes in their community.

"We are here today to show their inner strength, as they have come a long way," says Farah Kabir, country director of ActionAid Bangladesh. "I often take inspiration from them. Their courage is huge."

One of the models on the catwalk, Ganga Dasi, 40, had acid thrown on her face at the age of 17 after she refused a marriage proposal. "I lost all hope to live. No one came forward to help us," she said. "I am now more confident. I will not hide my face any more."

The runway show “Beauty Redefined” was organized by ActionAid Bangladesh in 2017.

Campaigning to change the law around acid attacks

Laws against acid attacks are also often weak. ActionAid Bangladesh has been working with acid survivors for 17 years and has a significant contribution in bringing the Acid Control Act 2002 and the Acid Crime Prevention Acts 2002 into light, restricting import and sale of acid in open markets.

Using acid is just one method used for the purpose of disfigurement. Other methods are used by perpetrators to attack women’s and girls’ bodily integrity – including using fists, knives, and other weapons.

In the case of acid attacks, the weapon used should not be the focus, but rather the root cause of the attack and the fact that in the vast majority of cases, violence is perpetrated against women and girls by men and boys.

ActionAid seeks to not only address legal reform, but also to prevent further attacks from happening to women and girls, by seeking a change in the social norms which permit men and boys to think that this is acceptable behaviour and to society placing value on women and girls based on their appearance.

Help for survivors of acid attacks in the UK

In the event of an acid attack, there are services that can help:

Emergency number – 999
For immediate first aid and to report an acid attack dial 999.

NHS
For advice on acid and chemical burns, refer to the NHS.

Changing Faces
Support for people whose condition or injury affects their appearance.

Katie Piper Foundation
Help and advice for survivors of acid attacks and other burns and their families.

Top image: Nur, pictured here outside her home in Bangladesh, was blinded in both eyes by an acid attack, which also burnt her face, chest and arms. Nicola Bailey/ActionAid