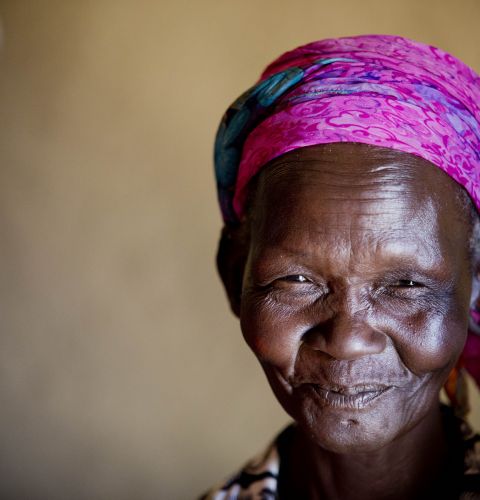 Find out what HIV is and why women and girls are disproportionately vulnerable to HIV, learn how ActionAid supports people affected by HIV and AIDS, and hear stories from women and girls we've helped.

HIV (human immunodeficiency virus) is a virus that attacks the immune system. If untreated, a person’s immune system will eventually completely deteriorate.

AIDS (acquired immune deficiency syndrome) is the term used to describe a series of illnesses and infections that people get at the last stage of HIV infection, once the immune system is severely damaged.

HIV symptoms vary depending on the stage of the infection. In the first few weeks after infection, most people experience a short, flu-like illness, lasting one to two weeks.

After this, HIV may not cause symptoms for many years, but long term, as the infection progressively weakens the immune system, people can develop other symptoms, such as weight loss, fever, diarrhoea and cough.

Without antiretroviral treatment, people living with HIV can also develop severe illnesses such as tuberculosis, severe bacterial infections and cancers.2

58%
58 per cent of new HIV infections among young persons occurred among adolescent girls and young women.5

Women and girls are disproportionately vulnerable to HIV

In sub-Saharan Africa, young women (15-24 years) account for 75 per cent of HIV infections and are approximately three times more likely to be infected than young men of the same age.6

Studies from Rwanda, Tanzania, and South Africa show up to three fold increases in risk of HIV among women who have experienced violence compared to those who have not.7

Five key links between HIV and violence against women and girls

The World Health Organisation identifies five key links between the two, showing how violence against women and girls, particularly domestic violence by intimate partners, is both a cause and a consequence of HIV infection.

Constance, 32, lives in Coast Province, South Eastern Kenya. She is HIV positive and a mother of two sons.

Constance used to experience stigma from her community, but since joining the Kuluhiro (hope) support group, supported by ActionAid, things have changed. All 48 members (41 are women) have access to antiretroviral treatment, and earn an income from a group farm project.

One of the things, I really like about this project is, that it has changed the way people look at me in the village."

"They see me carry vegetables to my family. Before, most people ignored me. Now they are curious to know more about me and why I'm so healthy. So besides helping me to survive, this project has also given me respect in my community.

“The project has made me a stronger woman in two ways. I am healthier because I get enough food and take my medicine. And I no longer feel ashamed because I have HIV.”

Constance, 32, who is HIV positive is helped by a project supported by ActionAid in Eastern Kenya

High prevalence of HIV/AIDS causes a huge increase in child-headed households - houses where a child under 18, usually the eldest, has become the head of the household. This is mostly because both parents have died, often due to conflict or disease.

The eldest children often have to drop out of school and find a way to earn money. This makes young girls even more vulnerable to sexual violence.

In Kenya, Homa Bay County has the highest rate of HIV/AIDS in the country, with an HIV prevalence rate of over 25%.

In some areas of Nyarongi, where ActionAid works, whole generations have been wiped out by HIV/AIDS, leaving young girls heading up families with no means to support them.

The local sugar factory attracts thousands of male workers from across the country. Girls, many of whom are child heads of households, are lured into sex by older boys and men in exchange for items like school uniforms, sanitary towels, food, or the promise of ‘a better life’.

This puts girls at risk of HIV infection, showing again how violence against women and girls is both a cause and a consequence of HIV.

How ActionAid protects women and girls from the impacts of HIV

We provide psychosocial support to help women cope with the stigma of living with HIV, and help change negative attitudes in communities.

Through our skills training and group projects we empower women to earn their own income, helping them afford antiretroviral treatment, and support their children.

All of our work to end violence against women and girls – such as helping stop child marriage and ensuring perpetrators are held to account – also helps reduce the risk of women and girls being infected.

Nabitalo Fatuma lives in Makere, a community in the slums of Kampala, Uganda, with a high prevalence of poverty and HIV.

When Nabitalo Fatuma's husband died of AIDS, she was left in a critical condition, being HIV positive herself. Like many other women, Fatuma’s only caretaker was her husband, so when he passed away she did not have money for school fees, food or clothes for her nine children.

Luckily, volunteers in her area heard of her situation and encouraged her to go to Makerere Women's Development Association (MAWDA), supported by ActionAid.

I’m so happy that the volunteers in the community found me and told me about MAWDA and ActionAid.”

She went to psychosocial therapy and counselling meetings, and ActionAid started sponsoring the youngest of her children, helping both her family and her wider community.

Nabitalo Fatuma was supported by ActionAid after her husband died of AIDS, Uganda

Top image: Marie, around 60 years old, adopted all five of her brother's children after he and his wife died of AIDS, West Pokot, Kenya. Kate Holt/ActionAid