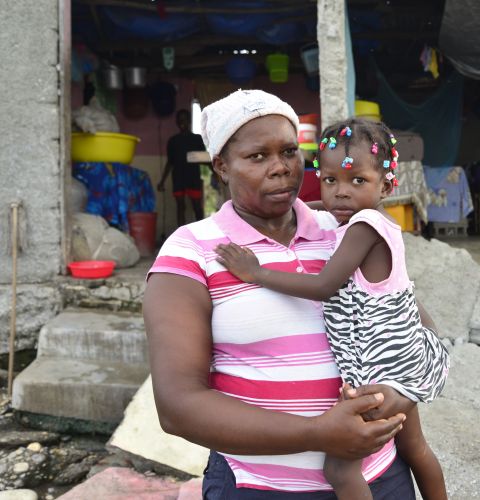 Over 2,000 people died, more than 12,000 were injured and around 26,000 people were displaced. The worst-affected areas were Grand’Anse, Nippes, and Sud, where the earthquake damaged dozens of health facilities and more than a thousand school buildings.

There was significant damage to homes, roads and infrastructure as heavy rains, flooding, and landslides followed just two days after the earthquake struck .

This earthquake was higher in magnitude than the 2010 Haiti earthquake that killed hundreds of thousands of people.

ActionAid responded to those most in need in rural communities in Grand’Anse, in the municipalities of Jérémie and Roseaux. We provided families with first aid emergency kits, tarpaulins, water, cash for food and shelter, hygiene kits, buckets with taps and essential kitchen items.

How your donation to Haiti makes a difference

Your gift to the Haiti Earthquake Appeal 2021 can help people in urgent need.

ActionAid’s emergency response teams were on the ground in the worst affected areas of Jérémie and Les Cayes, responding to people's most urgent needs after the earthquake.

We assisted households affected by the earthquake with:

Today brings back the trauma of the 2010 earthquake that tore Haiti apart. This deadly quake has destroyed homes and infrastructure in some of Haiti’s most vulnerable and marginalised communities.

In Jérémie, one of the areas most affected, our team is helping with rescue efforts as families desperately try to pull loved ones from the rubble. Sadly, we expect the death toll to continue to rise.

Women and girls are already bearing the brunt of the multiple crises facing Haiti, including rising hunger, political instability and gang violence. The devastating fallout from this earthquake, could push many more families into poverty and hunger.”

Marie Dieula after the 2021 earthquake in Haiti

After the Haiti earthquake

49-year-old Marie Dieula whose house in Jérémie, Haiti has been destroyed in the 2021 earthquake surveys the extensive damage to her home.

Widespread destruction of homes and infrastructure has left many families in desperate need of shelter and food support, facing another night sleeping on the streets. Many of those injured and displaced are women and children.

We thought about going somewhere else to spend the night... We all six squeezed ourselves under a batch. We used woods to hold it while it could barely face the heavy rain.

Everything is still under the rubble. I lost my goods which were my only way to feed my family. We have been digging to find clothes, sheets and our important belongings since that’s all we have."

ActionAid is an international charity that works with women and girls living in poverty.

Our dedicated local staff are changing the world with women and girls. We are ending violence and fighting poverty so that all women, everywhere, can create the future they want.

We operate in rural and urban communities across Asia, Africa and Latin America.

We're committed to ending the cycle of violence in communities around the world, enabling women's economic empowerment, and supporting women's and girls' rights during humanitarian crises.

Where your money goes

90% of your donation will go directly to our Haiti Earthquake Appeal.

10% of your donation will be retained for ActionAid’s Emergency Action Fund which will only be used for ensuring we are prepared and able to respond quickly and more effectively to future emergencies and crises.

If the total amount raised for this appeal exceeds the funds needed for the response, ActionAid will transfer the remaining balance to the Emergency Action Fund. All Gift Aid claimed on donations will fund ActionAid’s work across the world, wherever the need is greatest.

Top photo: Tessa, a mother, stands in front of her ruined house in Haiti holding her daughter in her arms. Photo: Fabienne Douce/ActionAid.