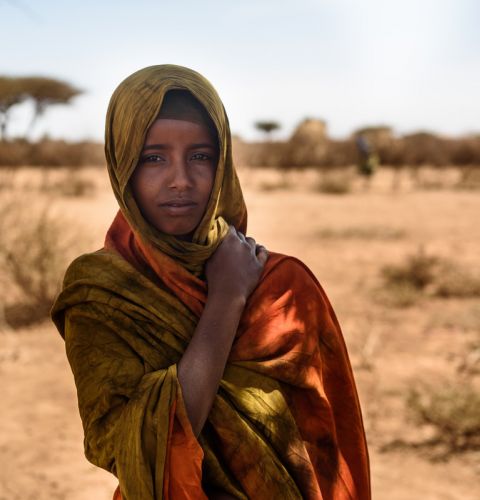 The effects of climate change are hitting many of the world’s poorest people first, and hardest. And they’re making poverty worse.

Extreme weather patterns, natural hazards and food and water shortages are threatening the lives of people living in poverty and, the poorer people are, the harder it is to recover from failed harvests, destroyed homes, and health crises.

It has been estimated that, by 2030, climate change could push more than 120 million more people into poverty.1

That’s why ActionAid is working with communities around the world to help build resilience, adapt to the effects of climate change, respond to disasters and support the specific needs of women and girls. Makeshift homes built in the desert in Somaliland, which has been pushed to the brink by climate change. Photo: Ashley Hamer/ActionAid

The relationship between climate change and poverty

Despite historically being the least likely to contribute to rising CO2 emissions, people living in poverty are often the worst affected.3

Meanwhile, many of the world’s richest and highest-polluting countries are feeling the impact of climate change the least.2

Richer countries tend to have the resources and networks to adapt to the changing climate, and more resilient infrastructure (such as water systems and housing) to cope with erratic weather events and disasters.

While poorer countries almost always have fewer resources and weaker infrastructure, making them more vulnerable to the effects of climate change.

Families for whom resources are already scarce are facing a worsening battle against poverty every day.

And for those who rely on farming for income and food, the effects are particularly stark. Poor land management policy and unsustainable development is causing the degradation of land, including soil erosion and desertification, which is speeding up negative effects of climate change. And higher temperatures, changing rainfall patterns and increased water scarcity are making vast regions of land unsuitable for food production.4

Over 1.3 billion people, mostly in developing countries, are currently trapped on degrading agricultural land, increasing their vulnerability to slow-onset disasters such as drought, desertification, food insecurity and even famine.5

And in the future, climate change threatens to wreak havoc on many more lives. It is estimated that up to 600 million more people in Africa could face malnutrition as agricultural systems break down due to climate change impacts. An additional 1.8 billion people could face water shortages, especially in Asia.6

Climate change is not just shining a light on the world’s inequalities; it is often deepening those inequalities themselves.

When disasters strike, it is those with less power and fewer resources who invariably suffer the most. But they also exacerbate poverty, because those most affected by drought or floods must sell their land or livestock at low prices, effectively transferring assets from the poor to the wealthy.7

600m
An estimated 600 million more people in Africa could face malnutrition as agricultural systems break down due to climate change impacts.9

1.8b
An additional 1.8 billion people could face water shortages, especially in Asia.10

ActionAid is working with communities across the world to develop solutions that help people adapt to the impacts of climate change, respond to disasters, and build resilience to climate change related extreme weather patterns.

At times of crisis, marginalised people are forced into negative coping mechanisms to survive. For example, girls can be forced to drop out of school or to be married earlier,  as their families are no longer able to afford to house or feed them.

That’s why we work with grassroots women’s networks to empower women and girls to stay in school, get the education they deserve and claim their rights.

Across the world, we’re also working with local partners to pressure governments around the world to take more radical action on climate change. We know that, to prevent the worst effects of climate change, governments, donors, climate and humanitarian agencies must work together and take urgent action.

In 2016 the world faced one of the worst El Niño weather events of all time. It also recorded the highest ever level of greenhouse gases in the atmosphere,11  intensifying the effects of El Niño.

The extreme weather and drought has contributed towards one of the most daunting food crises in living memory in Zimbabwe, destroying crops and killing livestock. ActionAid provided life-saving relief and supported women to take on leadership roles.

Geannie, left, owned a small plot of land and a well, but the well had dried out. She joined an ActionAid-supported local women’s group, in order to have a greater say in how the disaster was dealt with.

"That is why I want to become a governor,” she told us.

I want to be someone who does not forget about the people and what we need."

Malyuun was affected by the devastating drought in Somaliland in 2016.  She told us that, most nights, she had to listen to her children cry themselves to sleep from hunger.

She lost 15 sheep due to the drought, and was barely managing to survive with five remaining sheep and two cows.

She couldn’t afford to take her children to the clinic, despite their frequent illnesses.

ActionAid worked with communities in Somaliland to deliver emergency, live-saving aid. We also developed sustainable solutions to the drought, including building wells and concrete water tanks to supply livestock. And we delivered small loans through local women’s groups that enabled women to rebuild their lives and develop sustainable sources of income.

Top image: Romla is from Somaliland, where climate change has driven devastating droughts and caused her family to lose their livestock. Jennifer Huxta/ActionAid